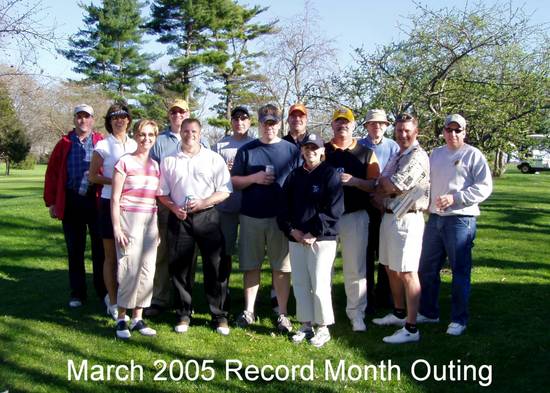 As the RecruitMilitary job board grew and improved, the company rolled out another new product in 2003: Targeted Email Marketing. Now targeted emails aimed special messaging to select groups of candidates according to client-specified criteria. An early client, the New York City Police Department (NYPD), purchased massive bundles of email blasts targeted at veterans who had been military police officers while on active duty.

In 2003, RecruitMilitary hired the HR Chally Group, a sales benchmark and career development firm located in Dayton, Ohio, to survey a portion of RecruitMilitary’s registered veteran candidates. The project aimed to find and measure differences in sales-related traits between veterans and civilians. The findings? Veterans scored higher in every area than their civilian counterparts. In 2005 RecruitMilitary published the white paper Forward . . . Sell! describing the outstanding sales-related traits of veterans.

“For the first time there was quantitative data about why it’s great to hire veterans. Before, we made the case for hiring veterans by talking to clients about the intangible qualities veterans have, such as leadership, organization, and doing more with less. But the survey gave us hard facts to add to the conversation,” recalled Larry.

More advertising agencies and marketing firms were becoming familiar with RecruitMilitary and its expanding product line. But soon the requests for a RecruitMilitary Media Kit became more frequent and more insistent. In 2005, RecruitMilitary rolled out a twelve-page media kit and an accompanying four-page rate folder.

By 2005, the company payroll had grown to 14 employees. Drew decided to make another senior management hire – someone who could identify and work with employer associations and veterans’ organizations, thereby allowing himself more time for executive decision-making. Matt Murphy served as an officer in the United States Navy and was a Philadelphia lawyer working in mergers and acquisitions. He joined RecruitMilitary in June 2005 as vice president of business development and eventually became chief operating officer.

Robert Walker, an Army veteran, joined the RecruitMilitary sales staff in October 2005. He applied himself to the task of getting companies to hire veterans, and eventually became a superstar. In January 2013, he was promoted to vice president of sales.

Matt quickly established a close working relationship with the National Association of Manufacturers (NAM), which had published periodic reports on skills shortages in the manufacturing sector. Many of the hard-to-find skills were not specific manufacturing skills, but rather general work skills and traits: showing up for work on time, taking and executing orders, team play, self-reliance, and initiative.

“To anyone who has served in the military, it is obvious that veterans possess the general work skills and traits that manufacturers need. We thought RecruitMilitary should point out that fact to manufacturers and companies in other industries,” said Matt. RecruitMilitary published another white-paper booklet, From the Front Line to the Production Line and established a formal Veteran Hiring Initiative with NAM.

One month later, RecruitMilitary implemented the Veteran Hiring Initiative Re-Sale Concept with the MidAtlantic Employers’ Association to sell RecruitMilitary products and services to its member companies at a discount. Purchasers could also use the RecruitMilitary logo on their websites and print materials.

In the fall of 2005, a major development occurred on the job board front. The Office of Federal Contract Compliance Programs (OFCCP), a unit of the United States Department of Labor, issued its final rule regarding the obligation of government contractors to solicit race and gender data for agency enforcement purposes. The rule affected database searches and job postings like RecruitMilitary sold to such contractors. In 2006, RecruitMilitary introduced OFCCP-compliant searches to help contractors with required search data and reporting.

The company was moving in the right direction. No one knew that its largest revenue generator was just around the corner and would revolutionize the military-to-civilian niche.