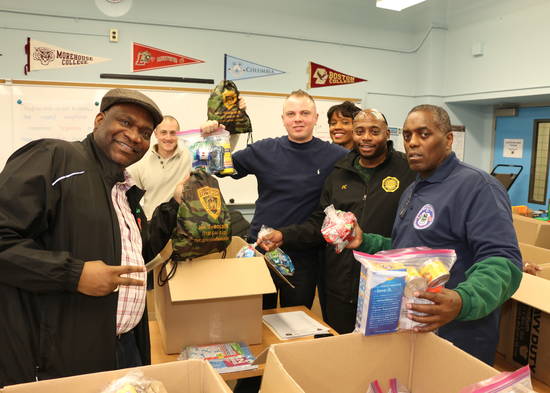 On a cold Saturday in March 2017, the NYC Department of Correction’s (NYCDOC) Youth Explorers, several NYCDOC fraternal organizations, and a few military staff members gathered at a school in Brooklyn to organize care packages for military employees deployed overseas. They packed bags with non-perishable snacks and wrote messages of encouragement.

One of the recipients of this thoughtful act of service was Adrian Lauriello, an executive agency attorney in the NYC Department of Correction’s Trials & Litigation Unit. Lauriello had been deployed in Afghanistan and received his care package just before he was scheduled to return home.

“It was great to get a package from my colleagues at work,” he says. “The Department has always been very supportive of my deployments.”

And there have been many. Lauriello has been an attorney with the NYC Department of Correction for more than 17 years, during which time he has simultaneously risen through the ranks of the U.S. Army Reserves. Today, he holds the rank of lieutenant colonel and serves as a judge advocate (JAG) where he provides legal advice to active duty battalions.

“What I do in the Army Reserves and what I do at DOC are very similar,” says Lauriello. “Each role helps me to be better in the other. I can bring an ‘outside’ point of view to my work in the Army, and then when I return to DOC, I come back with a fresh set of eyes and additional perspective.”

But it’s the people who get Lauriello excited to come to work every day. “Whether it’s talking to officers in the control room or housing areas, or talking to battalion leaders when I’m deployed, I always learn something. We may have different jobs, but we have a common goal. At the end of the day, it’s deeper than a paycheck; you’re working with like-minded people who have the same commitment to service that you do.”