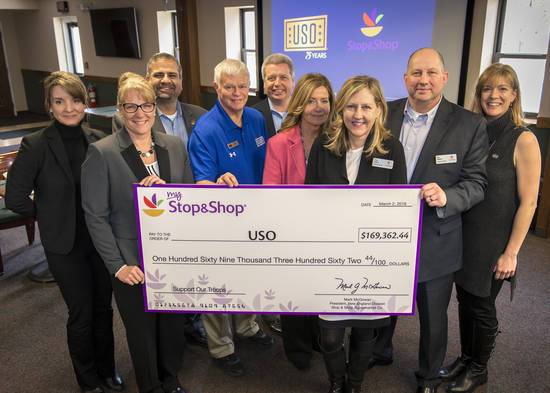 Stop & Shop, a division of Ahold USA, started as a corner grocery store in Somerville, Massachusetts, in 1914. Today, Stop & Shop is a 411-store chain with 65,000 employees and roots that run deep in hundreds of communities throughout New England, New York, and New Jersey. As it was in 1914, Stop & Shop’s commitment starts and ends with its customers.

Stop & Shop is committed to being a better neighbor by feeding the hungry and supporting organizations that advocate nutrition and exercise, supporting veterans, and raising funds for pediatric cancer treatment and research. In 2016, Stop & Shop donated more than $30 million in cash and product to charitable organizations and hunger relief organizations throughout New England, New York, and New Jersey.

Stop & Shop is dedicated to supporting and honoring veterans and their families. One way the organization accomplishes this is through Stop & Shop’s Veterans Business Resource Group (BRG), which participates in a host of programs and activities to support Stop & Shop associates who are members of the military community. The group also raises funds for community veteran agencies in New England, New York, and New Jersey.

Events hosted by the BRG include:

The Veterans BRG also has an informal mentorship program. The mentorship program started when a member of the BRG learned about a veteran employee who was having difficulty transitioning to civilian life. The veteran had used other support services, but he wanted to talk with another combat veteran who might understand what he was experiencing. The Veterans BRG connected him with peers within the organization and established a network to support him through his time of need.

A Background of Service

The Veterans BRG is headed by Stacy Wiggins, Senior Vice President of Operations for Stop & Shop. In this position, she primarily focuses on the operations, financial performance, and merchandising aspects for 211 stores located in Massachusetts, Rhode Island, and parts of Connecticut. Additionally, she is responsible for ensuring the effective execution and roll-out of all company initiatives and the creation and execution of competitive intrusion strategies.

Wiggins has 23 years’ experience in the retail sector. Prior to joining Stop & Shop, she held various executive positions at Ahold USA divisions, including serving as regional vice president of operations for Giant-Carlisle and as regional vice president of operations for the Metro Division of Stop & Shop. For over 18 years, Wiggins worked in various managerial positions at Wal-Mart, where she began her retail career as an hourly associate in Mechanicsburg, PA.

In 2011, 2013, and 2016, Progressive Grocer named Wiggins as one of the Top Women in Grocery. She currently serves on the Advisory Board of the Greater Boston Food Bank and on the Board of Directors for the South Shore YMCA in Massachusetts.

Wiggins spent four years in the Army as a specialist, where she worked as a graphic illustrator and was trained at the U.S. Air Assault School. Her enlistment added to a tradition within her family: her husband, brother, son-in-law, and two nephews have served either in the Marine Corps or the Air Force. “The transition from the military to civilian life was easier for me than for many others,” Wiggins said. “I was only in for four years, and a month after getting out, I married a Marine. As many people know, being married to someone in the service is very similar to being in the service yourself.”

Those lessons have helped her in every step she has taken in her civilian career. “If I think about the role that I am in today, those values are still a core part of what I do and how I act,” Wiggins said. “I have more than 35,000 associates who depend on me to keep them safe, make good decisions, and to give them guidance.

“My experience in the Army also gave me the confidence to believe that, if given the opportunity, I could do anything I set my mind to. Sometimes I sit back and think about how much my role is like being in the military. It is my job to ensure that we build a great team in order to move the business forward, and just like in the military, we are made up of all different types of people with different skills, abilities, drives, and desires.”

When building a team, Wiggins ensures that it has a healthy mix of talents and abilities to make it well-rounded and effective. “I saw that practice in the Army. It is important to know your own strengths and understand that everyone has different strengths. You need a team when you go to battle. When picking my team members, I ask myself, ‘Would I go to battle with them?’ It's not a question of would they fight and defend, but rather, would we be successful as a team.”

Leading in the Community

Even though it might not be apparent at first glance, Wiggins believes that there are many similarities between Stop & Shop and the Army.

“People might think, ‘How hard can the grocery business be? You put peas on the shelf.’ But it really is so much more than that. People depend on you to keep them safe, to give them choices, to take care of their family’s nutrition, be the leader in their communities, and to help them put food on their tables,” Wiggins said.

“To achieve that, we need leaders who pay attention to detail, are disciplined, organized, and structured. We need people who will not waver and will be there in times of need. These are all things you learn in the military.”

Being a community leader, Wiggins points out, involves a great deal of integrity. “People count on you every day to do the right thing. So you see, there isn't much difference in the line of thinking between my company and the military, which makes us the perfect fit for veterans. We employ hundreds of veterans in senior leadership and in the field, and we are proud to do so.”

Another reason veterans do well at Stop & Shop is because the core values of both organizations are similar. “When I returned to the civilian world after being engulfed in the military lifestyle for so long, I noticed a lack of discipline and professionalism. At Stop & Shop, our associates are expected to be professional and disciplined in our team-based, family atmosphere. That is why veterans are a perfect fit for Stop & Shop - they already live those values.”

Wiggins’ Advice for the Job Search

No matter what career path veterans take, Wiggins believes they should be proud of their military experience. “The best advice that I can give to men and women who are leaving their military careers and heading into the civilian life is to be yourself. Be proud of the fact that you have served. That experience is a strength,” she said. “I have interviewed too many veterans who do not mention that they have served in an interview. It is always tucked somewhere in the resume. You need to shout it out. When you sit down to write your resume, really think about all that you accomplished in the military. Do not just focus on your MOS. Focus on the skills that you learned along the way.”

At Stop & Shop, veterans remain a welcome addition. “I get excited and very interested when I see military experience on a resume. We need detail-focused, organized, dependable, disciplined, and structured people with the ability to lead others and hold others accountable. We want people who are able to listen, learn, and teach,” Wiggins said. “We are always looking for great leaders in our organization.”

Healthcare is currently one of the hottest industries in the nation for job hunters. Even if your...

The retail industry offers a myriad of options for both full-time and part-time job seekers in...

As a leader in behavioral and social science research and evaluation, American Institutes for...

ERGs are a collection of workers who join together based on shared characteristics or life...