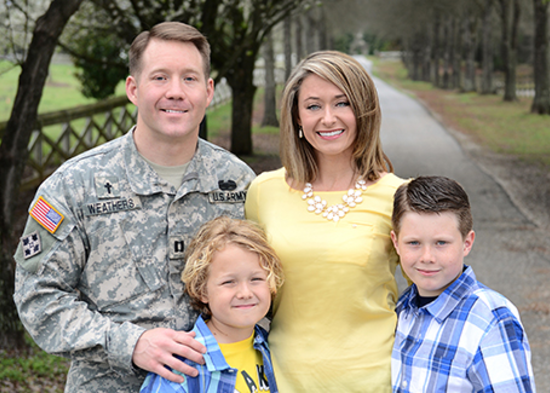 Gardner-Webb University (GWU), a private, Baptist-related university, provides undergraduate and graduate education that is grounded in the liberal arts, while offering opportunities to prepare for various professions. The main campus of 200 acres is in Boiling Springs, North Carolina, 50 miles west of Charlotte. About 5,000 students from 37 different states and 21 foreign countries attend GWU through the traditional day program, graduate studies offerings, and the Degree Completion Program.

GWU currently serves more than 100 veterans, active-duty personnel, and family members in undergraduate and graduate degree programs. In January 2015, the Military order of the Purple Heart named GWU a Purple Heart University. GWU was the first institution of higher education in North Carolina to receive that distinction.

“Gardner-Webb University’s recognition as a Purple Heart University further confirms our commitment to our active-duty personnel, veterans, and their families,” said David Hawsey, vice president for enrollment management and marketing and a veteran of the United States Navy. “We are grateful for the many Purple Heart recipients in our region, the state of North Carolina, and nationwide for their service and sacrifices that ensure our freedom.”

In November 2015, GWU recognized its veterans by dedicating “Freedom Hall,” a wall of honor in Dover Campus Center, a building that houses the student cafeteria, a banquet hall, and lounges. On the wall are pictures of veterans of various eras who were GWU students or faculty members, and various military images.

Among the most noteworthy graduates who are contributing to the well-being of active-duty military and veterans and their families are Matthew and Corie Weathers. Matthew is a United States Army chaplain who holds the rank of captain. Corie is a licensed professional counsellor and mental health clinician. She is the 2015 National Armed Forces Insurance (AFI) Military Spouse of the Year, and she uses that award as a platform to speak at events for military families across the nation.

In addition, Matthew and Corie co-own Insightc2, a ministry that serves and supports military marriages. And in early 2016, Corie became the foundation ambassador for the Chris Kyle Frog Foundation, which provides retreats and other services to first-responder and military families. The foundation is named after the late Chris Kyle, a Navy SEAL and author of the book American Sniper. Corie and Matthew Weathers met at GWU, and they were married a week after graduation in 1999. In 2004, Matthew joined the Army Reserve as a chaplain. In 2008, he joined the active component of the Army.

Corie Weathers believes that many things she learned as a student at GWU have carried her forward to where she is now. “The professors at Gardner-Webb gave me confidence,” she said. “They really challenged me.”

“Because of them, I discovered that writing well was something I could do. I never thought that was possible before I went to school there. Also, their counselling department was excellent. By the time I went to graduate school, I was completely prepared. Going to school at Gardner-Webb really shaped me and helped me grow.”

One of the most important things she gained at GWU was a powerful work ethic. “The professors were tough,” she said, “but they prepared me for life. They taught me to work hard and study hard. Everything I learned there was applicable to real life.”

She also gained a spiritual education – and that taught her how to recognize the difference between healthy leadership and toxic leadership. “That was something I found really valuable,” she said. “It is so important to be able to recognize and build a healthy support system. Gardner-Webb taught me how to do this both spiritually and professionally.”

“Now, I have an incredible group of military spouses who champion me. I know I can lean on them for support, and they can count on me as well. I also have a support system of friends from Gardner-Webb who hold me accountable, and vice versa. We all still keep in touch and regularly check in.”

When Matthew deployed from 2009 to 2010, she found herself prepared for the difficulties that they faced as a couple, mostly due to the foundation she had built with him at GWU. “Many of the challenges that came up were things we knew could happen,” she said. “The spiritual foundation we got from our experience at Gardner-Webb was rock-solid. It really shaped us – it gave us a good understanding and outlook when the challenges came.”

Indeed, she counts that deployment as a milestone in her life and career. “It was a very difficult deployment, and not just because it was our first,” she said. “Matthew came home safe, but things were different. The entire experience solidified my passion to work with couples who have been separated due to military service and those who struggle with post-traumatic stress disorder (PTSD).”

Another milestone: Being able to work behind the scenes to help military families as a group practice clinician. “That was eye-opening. I realized that military spouses need more resources. And I really could understand what different couples were going through because I had gone through those same things. My husband and I worked together to wrestle our way through the struggles. That gave me something to talk to people about.”

During this time, she also gained a deeper insight into people affected by PTSD. “It really softened my heart for those struggling with the disorder,” she explained, “because I saw how prevalent it is in the military community – and how many different ways it affects families and couples.

“Interestingly enough, I think the first book I read in my psychology class at Gardner-Webb had a chapter devoted to soldiers with PTSD. It’s just something that stayed with me.”

And yet another milestone: In December 2015, as Military Spouse of the Year, she joined Secretary of Defense Ashton Carter on his holiday tour of Turkey, Iraq, Afghanistan, and the Persian Gulf. “This experience was so enlightening,” she said. “It helped me further understand the experience of servicemembers overseas – and that new understanding helps me bridge the gap between veteran and spouse.”

ADVICE FOR OTHER SPOUSES

She also reminds military couples that a support network can be huge in maintaining a healthy relationship. “We can’t do everything ourselves,” she said. “We need resources and friends and advice. Isolation keeps us from growing emotionally and spiritually. We need to be willing to reach out. As an example, I am still in touch with my professors at Gardner-Webb. I will ask for advice on books to read to help me understand certain issues better.”

But advice and support can go only so far. “Even the best of outside leadership cannot fix marriages,” said Weathers. “In the final analysis, we as couples are responsible for our families and marriages. No one but ourselves can make us succeed. It is up to us to work through challenges together – as partners.”

Although Weathers was not in transition from military service when she attended Gardener-Webb University, she recommends the school to those who are. “Transition is a difficult process, and it is okay to take it slowly,” she said. “Transition time is a great time to get an education and use your benefits. Gardner-Webb gave me a great education and contributed to my spiritual development. The campus is in a peaceful and beautiful location. It is simply a wonderful place for those who want or need centering.”