A Circuit of Camraderie 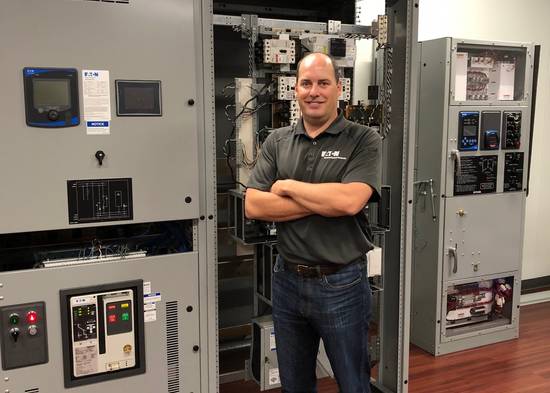 Like many young Americans, football was a major part of David Bader’s life. He grew up playing the sport, and was good enough that that the United States Naval Academy in Annapolis recruited him to play for their team. It was an opportunity that shaped the rest of his life.

Bader, a system engineering major, dreamed of becoming a pilot after graduation, but because of less-than-perfect vision, he didn’t qualify. Instead, he became a surface warfare officer and never looked back.

Since then, he’s moved around quite a bit, raised a family, and then, 12 years ago, branched into a civilian career with Eaton.

Now, he’s Eaton’s Engineering Field Service district manager in Nashville, where he manages a team of technicians and engineers.

In many ways, Bader has found that his military experience has formed the person he is now. His career at Eaton has been enriched by what he learned in the Navy.

Elizabeth: Tell me about your current role at Eaton.

David Bader: I manage a team of 20 remote technicians and engineers that service Tennessee and Kentucky. My team does custom, highly-complex engineering solutions that allow facilities to run with more efficiency. We also find ways to extend the life of very old existing equipment.

E: How did you get from where you started with Eaton to where you are now?

DB: I’ve always been flexible in terms of geography and duties. In Dallas, I was an individual contributor as a technical engineer, then I went to Los Angeles to be the facility production manager for several years, and then I moved to Baltimore to be the plant manager for a very similar production site.

After I had been in Baltimore for about three years, I was asked to come to Nashville to get a new facility started and running.

It was an awesome opportunity. I picked the building, designed the layout, hired the employees, and basically set the culture. It took about three years to get the facility up and running and after that, I transitioned into my current role.

E: I understand you run the company’s Veterans inclusion Employee Resource Group (Vets iERG). How did that come about?

DB: A few months ago, I was asked to assume the leadership position for the Vets iERG, and it’s been tremendous. The group started four or five years ago as a conduit for inclusion and diversity. It creates a space for people in the military community to share ideas and find support. Right now, there are about 660 members in North America and it’s open to veterans, supporters, and allies.

The Vets iERG is also involved with talent recruiting, and we have an Eaton talent scout network that visits bases and hiring conferences to try and bring in military talent. Once they are hired, we have a mentoring program to help ease the transition from military to civilian life.

It’s been a huge challenge - leading and trying to communicate across the entire country with so many people. But it’s been really rewarding. It’s a huge honor to be a part of that group.

Currently, about eight percent of all new hires are former military, so having a group like the Vets iERG is essential for our company. It’s a way to bring in most people’s favorite aspect of their time in the military: that feeling of camaraderie.

E: Is that what you enjoyed most about the Navy?

DB: Definitely. I was on ship of about 220 people but it felt like a family. At first, I was 22 years old and had no idea what I was doing, but I was expected to lead a team of 10 to 12 seasoned sailors. That experience taught me some challenges of being a leader.

I’ve relied on that experience all throughout my career, especially in new positions where I am working with others and setting the direction and tone for our team.

Camaraderie and team-building were the things that I have enjoyed the most and have benefitted from since.

E: Do you have a favorite Navy story that you like to tell?

DB: I was part of a counter-drug operation in South America. We had been on that mission for about six months when we boarded a ship and found two tons of cocaine hidden in a secret fuel tank. That was a wild day.

E: What was the first thing you did when you got out of the military?

DB: I had no idea what I wanted to do. I went to a career conference in Washington D.C. for service academy graduates, and just worked my way around the room. I didn’t know anything about Eaton, but I had a great conversation with the Eaton recruiters.

I was actually offered two positions at Eaton. One was in Dallas, where I had grown up, so I accepted the job there as a project engineer. It was an awesome opportunity and I was ready for the challenge.

E: It sounds like you’ve really enjoyed your time with Eaton. In addition to the ViERG, how does the company support you and other veterans?

DB: Eaton has ongoing mentoring and development for employees. This includes things like teaching veterans how to leverage their skills and how to improve their network within Eaton so that they can position themselves for more opportunities.

We’re working to be more flexible in job requirements and offer alternative options. So that means if a veteran doesn’t have a four-year degree, but has experience they could leverage instead, they would still be a viable option for that role. In a nutshell, it is more of a skills assessment than a check-the-box requirement.

E: What are some of your favorite things about working for Eaton?

DB: In some ways it feels like running a small business with the financial backing of a 20.4 billion-dollar company.

E: How would you describe your company culture?

DB: I’ve been with the company for 12 years, and in every department, I’ve found a supportive team environment. Even though Eaton is a 100,000-person company, there are resources available to help you along the way.

I think Eaton’s inclusion and diversity efforts have fueled the growth of the company and provided a way for unique ideas and perspectives to come through. These efforts create a space for individuals to escape a group mentality and to be creative and innovative.

E: If you had one piece of advice to give a veteran who’s considering working for Eaton, what would you say?

DB: Don’t worry about finding the perfect role right away. Sometimes it’s best to come onboard and learn about the organization, learn our business, and learn our products, and then once you are established, you might gain clarity on which areas within the organization will be a good fit for you.

Eaton is a large company with so many divisions and products. You have endless opportunities to find what really interests you, grow, and experience new things.

AT EATON, WE’RE DEDICATED TO IMPROVING PEOPLE’S LIVES AND THE ENVIRONMENT WITH POWER MANAGEMENT TECHNOLOGIES THAT ARE MORE RELIABLE, EFFICIENT, SAFE AND SUSTAINABLE.

Sergeant Camilla Gore Hull knew that joining the United States Army would prepare her for a...

Associations of energy companies are great sources of information about the energy industry and...

Energize Your Job Search - High-Paying, Secure Jobs Are Available in the Energy Industry

The recent drop in oil and gas prices has slowed the growth of much of the energy industry, but...