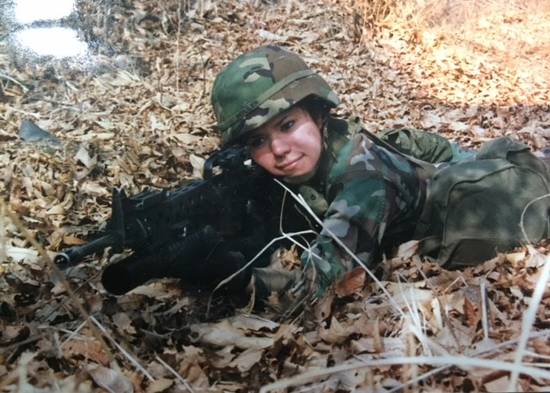 The DAV-RecruitMilitary Chicago Veterans Career Fair proved fruitful for Daisy Rivera. She received two job offers at the four-hour event. Ultimately, she landed a role as a branch manager for Merendino Cemetery Care.

Now, as a branch manager, she oversees lawn care and workers and often serves as translator for many of the Spanish-speaking employees. Another aspect of her job is in sales, where she prospects additional cemeteries for Merendino.

Rivera joined the U.S. Army right out of high school at age 17. “I was always adventurous and independent,” she said. “I wanted to travel and see the world.”

During her 10 years of service, with eight years on active duty (one year with the National Guard, and one year with Army Reserve), Rivera worked in radio repair and installation and cross-trained to install telephone wires.

Her favorite part about the Army was getting to experience different cultures. “Whenever I was overseas and had time off, I tried to play tourist and visit all of the local attractions,” she said.

“As veterans, discipline and loyalty make us attractive hires,” Rivera said. “I believe employers find value in hiring veterans, because they know they will have hard working, disciplined team players who can learn new skills, are ethical, highly motivated, and have integrity,” she said.

Over the years, Rivera held supervisory positions in the Army that helped build her leadership skills. “The Army taught me how to be a professional and how to be approachable. When I enlisted, I was very shy. My service exposed me to people from all walks of life.”

Transition to the Civilian Workforce

After the military, Rivera wanted a job that would make the most of the communication skills learned in Army Signal Corps. This desire led to a 21-year career as a police dispatcher and 911 operator, where she rose to senior dispatcher.

“What helped me in my career as a 911 dispatcher, especially during the most trying circumstances, was drawing on the core values that were instilled in me from the first days in basic training: discipline, duty, and honor,” she said.

There was never a dull moment. She recalls an incident at the very beginning of her career when a mother called because her baby was choking. “The woman was hysterical, but you must put your emotions aside and let your training kick in. I was able to calm her down and got her to do the first CPR step of tilting the baby’s head back to open the airway. I could hear the baby start to cough and cry. When you’re in the moment, your training kicks in,” she said.

She later received an award for her actions. “When I heard the tape played back, I couldn’t believe how calm I sounded, but that’s what we are trained to do,” she said.

Another time, she had three major emergencies in one day: “It was a Sunday afternoon, which is usually quiet. But during my shift, three calls simultaneously: a bomb threat; a suicidal subject who had barricaded himself into his residence; and a missing person. But my experience had taught me to handle each situation,” she said.

In 2016, Rivera was one of many 911 operators who were laid off due to suburb consolidations in her district. “I would have had to restart at the bottom,” she related, “so I decided to go in a new direction.”

In 2017, she attended a DAV-RecruitMilitary hiring event in Chicago. “I was so excited to attend and be among fellow soldiers,” she said. “And the speaker at the beginning got all of us really motivated to find success that day.”

Noting that the crowd was headed to the booths at the front of the exhibitor space, Rivera decided to avoid the crowd by starting at the back of the room and working her way forward. There, she came across Merendino Cemetery Lawn Care. “They were my first booth. I thought they were a great company and had a good conversation with them. I stopped at all the booths, but went by Merendino a second time. They asked for my resume, and I interviewed with them one week later.”

When it comes to job fairs, Rivera offers this advice: “Visit every booth you can! Especially the unlikely ones. You never know where it may lead. I secured two interviews with job offers for positions I had not considered before,” she said.

To be thorough in your search, you need to leverage your veteran network, Rivera advised. Rivera is a proud member of the American Legion, where she has held leadership roles at both the local and district level, respectively, as a post commander and junior vice commander. She also became the first female post commander for the Lincolnwood (Illinois) American Legion.

“Take advantage of the many programs available for veterans transitioning into civilian life,” she said. “Get connected through local veterans’ organizations and become involved in them. They also provide a great opportunity to socialize with other veterans from all military branches and eras in a fun and safe atmosphere.”

How Do Exhibitors Measure Success?

What makes RecruitMilitary job fairs worthwhile for the employers that exhibit? What are they...