A Tradition of Service: Veterans Become Partners at Starbucks 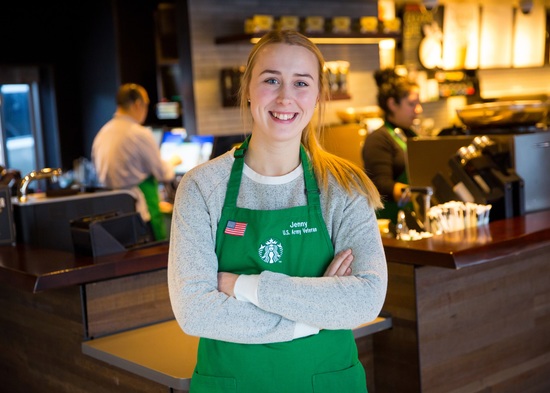 Starbucks opened in 1971 as a single store in Seattle’s historic Pike Place Market. While still headquartered in Seattle, the company has since grown into a multi-billion-dollar business with more than 24,000 retail stores in 70 countries. Yet, through the growth and change over the years, the company’s mission remains simple: To inspire and nurture the human spirit – one person, one cup, and one neighborhood at a time.

Starbucks stores are a neighborhood gathering place for meeting friends and family. The stores are a place where customers can enjoy quality service, an inviting atmosphere, and an exceptional beverage. Starbucks employees, who are referred to as partners, are at the heart of the what is considered the “Starbucks Experience.”

The organization believes in treating their partners with respect and dignity. As such, they are proud to offer two landmark programs for our partners: comprehensive health coverage for eligible full- and part-time partners and equity in the company through Bean Stock, a program that provides opportunity to share in the financial success of the company through shares of Starbucks stock.

Being a Starbucks partner means having the opportunity to be something more than an employee. Huge possibilities lie ahead for partners: They are given the chance to grow as a person, in their career, and in their community. They have the opportunity to live the Starbucks mission, to be a leader, to become their personal best, to be connected to something bigger, to be meaningful to the world, and to be recognized for all of it.

But hiring is only part of the objective. Retention is also incredibly important, which is why they created the Armed Forces Network (AFN), a community of Starbucks partners dedicated to supporting military partners, support transitioning military and their families, and create a veteran-friendly workplace.

On Independence Day 2014, Starbucks presented patriotic aprons to veteran or military spouse partners working at the company’s first military community store in Lakewood, Washington. The aprons are embroidered with the American flag, the partner’s name, and military affiliation. The aprons are now in use in all stores across the United States.

A FOUNDATION FOR SUCCESS

Tom Tice retired as a master sergeant after 20 years of service in the U.S. Marine Corps. He is now the military talent acquisition recruiting manager at Starbucks. When Tom walked in to the Starbucks located in Issaquah, Washington, and saw Jenny Chapin behind the counter wearing a patriotic apron with a flag pin, he decided to strike up a conversation.

“She appeared so young,” Tom said. “I looked at the flag and I thought there was a mistake – that she had forgotten her apron and just grabbed one in the back of the store.” After a few questions, Tom discovered that Jenny is enlisted in the U.S. Army Reserve in addition to working at Starbucks. At Starbucks, where Jenny started in 2016, she is a shift supervisor at the Issaquah, Washington store. In the Army Reserve, she is as a human resources specialist and a postal clerk in the 909th Human Resources Company, headquartered in Bothell, Washington. She is also currently enrolled in school, attending classes at Arizona State University.

When it comes to having multiple roles, Jenny has found that her military training has taught her to manage all the moving parts. “When you’re going through basic training,” Jenny explained, “you’re taught how to handle and overcome any situation. First you observe and then you react. You don’t let your personal feelings dictate your actions. You just handle the situation.”

Her military experience also taught her how to react to stressful situations, a skill she needs quite a bit in her current roles. “First you observe and then you react. Don’t get caught up in the emotions. Just handle the situation and keep going,” Jenny said.

The 20-year-old Covington, Washington, native graduated from high school in 2015 and found herself feeling restless. Jenny already accumulated college credits through her high school’s Running Start program, but to Jenny, military service was more appealing than university life. Two months after receiving her high school diploma, Jenny enlisted for a six-year active duty tour and a two-year inactive duty tour as a reservist.

It was during basic combat training in South Carolina when Jenny realized she wanted to become a Starbucks partner. “There was a Starbucks near base and every time I went in, the welcoming atmosphere struck me in a positive way. I found myself wanting to be a part of that environment,” Jenny said. Shortly after, Jenny decided to apply at that location for part-time employment. Following her interview, she was hired on the spot.

Dija Fraser, vice president of Starbucks’ North American talent acquisition, believes that hiring servicemembers is important for a number of reasons. “The qualities instilled in servicemembers, like Jenny, provide a foundation for success with Starbucks,” Dija stated. “Recruiting partners who can apply the leadership skills they have developed during their military service aligns with Starbucks’ goal to hire 10,000 veterans and military spouses by the end of 2018.”

Jenny and Dija met in 2016, when Tom invited them to view the company’s Honor Wall, located at Starbucks’ headquarters. The wall is etched with names of partners who are veterans or military spouses. Starbucks maintains their Honor Wall as a space to show gratitude and respect.

Though Dija never served in the military, herself, she is an advocate for veterans and military spouses. In fact, her grandfather served in the U.S. Army. Dija, who has been a Starbucks partner for 23 years, knows the values veterans hold transfer over into Starbucks culture. “Our recruiters strive to find people who hit the job running, and that is defined by an ability to walk out onto the floor and make a difference instantly,” she said. “We are looking for leadership ability and we are looking for people who can work and serve with others as part of a team.”

Dija realizes there are challenges to serving in an active capacity while working at a civilian job. “It is difficult to be a reservist, so we offer flexible hours with that in mind,” she said. “Our benefits program accommodates the needs of reservists.”

Starbucks’ military service pay benefit provides eligible partners with up to 80 hours of pay each year, when service obligations take them away from their work with the company. Starbucks also provides a military pay allowance for eligible partners called to active duty. If a partner’s military pay is less than their rate of pay when the absence begins, Starbucks pays the difference.

Jenny appreciates the support she receives from Starbucks. “My apron means the world to me,” Jenny said. “There are veterans who come into the store all the time and inquire about the meaning of the flag pin. It is cool to meet other veterans. The pin is a conversation starter and shows that we have a connection.”

Announcing the 2017 Most Valuable Employers (MVE) for Military®

When it comes to employing veterans, servicemembers, and their spouses, some companies just do it...

With new ways to find and create energy, and there are exciting innovative ideas all the time....

Avoiding the Shortchange Effect in 2017

For many business owners, things like sleep, nutrition, and exercise tend to lose priority in the...

Uniting the Power of Many at Eaton

After 20 years in the United States Navy, Ben Cook retired as a commander. Now he works at Eaton...