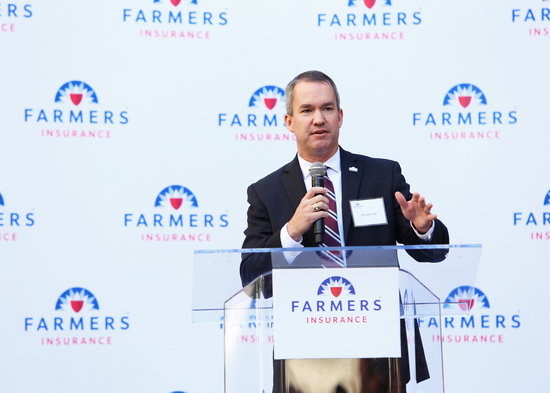 Farmers® and Farmers Insurance® are trade names for a group of affiliated insurers providing insurance for automobiles, homes, small businesses, and a wide range of other insurance and financial services and products. The organization serves more than 10 million households with over 19 million policies across all 50 states, through the efforts of over 48,000 agency owners and approximately 20,000 employees.

Founded in 1928, Farmers is headquartered in Los Angeles, with other major operations in Kansas City, Seattle, Austin, and Caledonia, Michigan (near Grand Rapids). Farmers Insurance Exchange® is one of the largest U.S. companies to be recognized on the 2016 Fortune 500 list, and is the largest of the three primary insurance providers that make up Farmers Insurance Group of Companies.

There are several opportunities available at Farmers, especially for project managers, claims representatives, and entrepreneurs interested in owning their own agency. Specifically, the organization is looking for individuals interested in becoming agency owners in Georgia, New York, Connecticut, Pennsylvania, and New Jersey.

Farmers knows from experience that men and women with military backgrounds can make excellent employees and business owners. In fact, the two founders of Farmers Insurance, Thomas A. Leavey and John C. (Jack) Tyler, were World War I Army veterans. Five of the former chief executive officers previously served in the military. And many successful Farmers agency owners and employees are veterans, ranging from former enlisted to senior officers.

To Farmers, an employee with a military background brings a wide range of valuable skills. Farmers is looking for individuals who:

■ Are natural, adaptable leaders, committed to their teams

■ Are driven and see things through

■ Perform well under pressure and in stressful situations

■ Are committed to excelling in a variety of situations

■ Are creative in seeking solutions to challenges they confront

Farmers has found that military experience and training can prove very successful in a number of the opportunities available within the company. For example, veterans with an interest in entrepreneurship can leverage their ability to lead, work in teams, and of course, work without supervision in a Farmers agency owner position.

When it comes to hiring veterans, the company’s goal is “to provide mission-centered work that veterans and reservists alike can identify with, contribute to, and become passionate about.” Farmers equips its people to participate in the decision-making process by bringing their best thinking and sharpest skills to the challenges faced by the organization.

Adjusting to civilian work culture can be challenging, so Farmers provides specialized onboarding for newly-hired veterans. This onboarding connects the new hires with advocates and mentors who are also military veterans. The advocates and mentors assist the new hires through their transition and encourage them to get involved in one of Farmers’ employee resource groups (ERG), such as the Veterans and Advocates group.

Veterans and Advocates was created to provide a community for veterans working at Farmers, and to help recruiters and hiring managers better understand how military skills transfer to civilian skills and various positions.

Those interested in learning more about the agency ownership opportunity are encouraged to watch these videos of current Farmers agency owners.

Russell Lee served his country for nine years after graduating from the U.S. Military Academy at West Point. Lee led soldiers at multiple levels within the Army, including the platoon, battery, and brigade level. His military career concluded with the leadership and deployment of more than 3,000 soldiers from Fort Hood, Texas, to Baghdad, Iraq, from 2004 to 2005. In this role, he served as the 5th Brigade Combat Team battle captain, and was awarded the Bronze Star for exemplary service.

He is now the vice president – territory product lead (TPL), Texas, with Farmers. Lee has been in this role for two years and is responsible for Farmers’ profitability and loss throughout the state of Texas. His product responsibilities include private passenger auto, residential, and umbrella products. Lee leads a staff of seven product employees to manage the strategic and tactical operations of all related functions for the designated products in the state of Texas. During his tenure as the TPL, Farmers has grown written premium by over 10 percent while simultaneously improving profitability significantly year over year.

Lee started his career at Farmers as the head of strategic execution, where he was responsible for leading the strategic omni-channel initiative that enhanced the ability of Farmers customers to interact with the organization or their agent through their preferred means of communication, whether in-person, through a call center, or over the internet on a computer or mobile device. Under Lee's leadership, Farmers more than doubled its acquisition of new business through the direct channels, including the call center, online, and mobile, while simultaneously ensuring an agent was assigned to every policy to help fulfill the Farmers value proposition. Lee also worked tirelessly to expand Farmers servicing efforts via the web and mobile, creating the ability for customers to service their policies at a time that is most convenient for them.

In addition to his other duties, Lee is the executive sponsor and co-founder of Farmers’ Veterans and Advocates ERG. In this capacity, he leads all aspects of veteran inclusion at Farmers including training, advocacy, development, and recognition events.

A CULTURE OF GIVING BACK

Charles Johnson is another example of a veteran who has found success at Farmers. Johnson retired as a colonel after serving a total of 32 years in the U.S. Army and U.S. Army Reserve.

“Early in my career, I was a platoon leader and company commander for tank units,” Lee said. “As a field grade officer, I was a personnel officer, an operations officer, and a logistics officer at the battalion and brigade levels. As a lieutenant colonel, I was battalion commander for a drill sergeant battalion. I also worked at the Pentagon in the Army Asymmetric Warfare Office. As a colonel, I was responsible for training deploying reserve units on the military decision-making process and training unit staffs during various war fighter exercises.”

During his time in the reserve, Johnson learned how beneficial military connections can be in the civilian work force. “I was seeking a position with AT&T during my time as a reserve officer,” he said. “I had just taken command of a company and upon meeting my new first sergeant, I discovered that he had been with AT&T for 15 years. I was able to more quickly navigate the system at AT&T and secure a position with the company because of networking with that first sergeant.”

While there were challenges to serving in the reserve while also working in the civilian world, Johnson said he would not change a thing. “I have certainly faced my fair share of challenges that come from being in the reserve while managing a civilian career, but I wouldn’t change my path,” Johnson said. “Since there was a chance I could be gone at a moment’s notice for months, my reserve duties may have made it more difficult for me to advance my civilian career. But it worked out for me in the end, and helped shape me into the person I am today.”

His full transition to the civilian workforce began at General Dynamics, where he had the chance to translate the skills he used in the military into his civilian work. “As a lieutenant colonel, I was an exercise project officer responsible for managing training projects, which led to my current position with Farmers Insurance,” Johnson said. “Prior to joining Farmers, I was fortunate enough to work at General Dynamics, which allowed me to continue doing the same thing I had been doing for years in the Army. My first position out of the military was as a contractor,

In 2016, Johnson joined Farmers as a project manager, product development, where he is responsible for managing the work stream of a project within Farmers Insurance that will transform the way Farmers does business from a technological standpoint. During his time at Farmers, he has found that the soft skills he cultivated during his military career have proven instrumental in his civilian work. “Some skills require real-life experiences to round them out. Skills like leadership, accountability, respect for individuals, respect for those in authority, and the ability to trust, yet always verify the facts – these are things that you can’t master by going to a class. The military provided me with those experiences and rounded out those skills.”

In addition to the soft skills, there are certain values that the Army instilled in Johnson which he finds useful in his career now. “Integrity and honesty, which are core values of the military, are highly valuable traits, as well as more tactical-focused things, like always being mission-oriented and having the ability to stay on top of upcoming deadlines.”

Johnson believes that Farmers is a great place to work because the company understand and appreciates the sacrifices men and women make while they are in uniform. “First and foremost, Farmers was founded by two World War I veterans. The company truly values the experience and training that veterans can bring to the workplace,” Johnson said. “The military is a great source for employees at all levels. Additionally, Farmers understands the sacrifices made by veterans and creates a culture of giving back at all levels.”

To Johnson, staying in contact with other military members or veterans is an important aspect of civilian life. “I think there are two important things transitioning veterans should focus on: networking and soft skill translation,” Johnson said. “It’s important to cultivate a network of veterans who you keep in touch with, and know where they find employment post-service. It’s great to have help when you are seeking your next career, especially from someone who knows, first-hand, the type of value veterans can bring to a civilian company. It’s also important to focus on how the soft skills you acquired during your service, like leadership and accountability, can translate to a civilian career.

“Use your network of fellow soldiers who have already made the transition to help you interpret these soft skills on your resume, so you can highlight what you have learned in relation to potential employment opportunities. Basically, you’re leaning on your network to learn how to ‘civilianize’ your skill set for corporate employers.”

As for getting a job at Farmers, Johnson encourages veterans to use their network. “Farmers is a tremendous home for veterans, and you can get a sense for what our organization stands for by looking at our website, which will also help you determine what opportunities are available in your area,” he said. “While you’re on the computer, you should also check on social networks, like LinkedIn and RallyPoint, to see if you have any connections to current Farmers employees, veterans and civilians alike. Let them know you have applied for a position and ask them to look at your resume. But don’t let LinkedIn and RallyPoint be the end of your networking. Attend networking events and job fairs in your area, which can be a great way to catch up with existing contacts as well as meet new ones. Continually grow your network.”