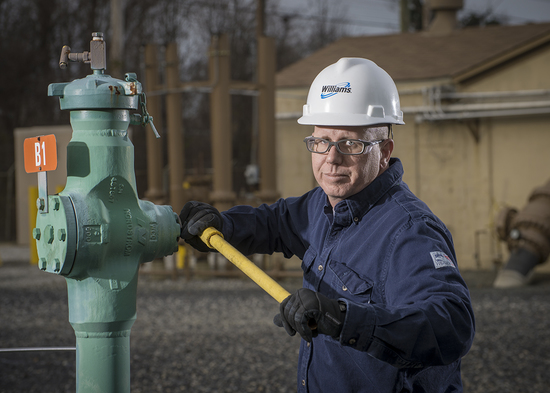 Williams’ headquarters are in Tulsa. Other major offices are in Houston, Texas, Pittsburgh, Oklahoma City, Salt Lake City, and Calgary. Williams was founded in 1908, and employs more than 6,700 people.

The company’s primary talent needs are for operations technicians at the mid-career stage – five or more years of experience. Skills and qualifications for those roles include: mechanical, electronics, maintenance, gas compression, measurement systems, instrumentation control, technical evaluation, and safety.

Veterans played a key role in the history of Williams. Three second-generation members of the founding family served in World War II. Charlie Williams was in the United States Army Corps of Engineers; he supervised the construction of airfields, pipelines, and roads in the China-Burma-India theater. Charlie’s brother John was with the Navy Civil Engineering Corps; he served in the Pacific theater, including Iwo Jima. Charlie and John’s cousin David Williams, Jr., was a fighter pilot with the 8th Air Force of the Army Air Corps. He flew missions over Nazi-controlled Europe. Shortly after returning home, the three men took on the task of rebuilding the company. Currently, veterans make up about 10 percent of the Williams workforce. One of the company’s strongest supporters of veteran hiring is Doyle R. (Bud) Rains, who joined the company in 1990, and has been director – construction management – for three years.

“When I think of veterans and the most valued traits they bring to a company and work environment, I think of leadership, discipline, situational awareness, adaptability, and esprit de corps,” he said. “Most of the experiences that a veteran will gain on active duty will never be matched in the civilian world. This gives the veteran a distinct advantage over anyone who has not served in the armed forces. In addition, many veterans have hard skills that are valuable to our operations group at Williams – skills in electronics, mechanics, troubleshooting, etc.”

“When individuals enter basic training, they are given very simple tasks that have to be accomplished in a very specific way and within a very specific time frame. As they progress to larger tasks with greater levels of responsibility, they quickly become aware of the importance of doing the task correctly, according to plan, and the reasons why attention to detail is so important. These are characteristics that become second nature while taking on additional and greater responsibilities, and these qualities follow the individuals their entire lives.”

Veterans also have a way of thinking that is hard for civilians to replicate. “In addition to learning and understanding responsibility, veterans gain a level of respect for themselves, for accomplishments achieved while usually performed in less-than-perfect conditions,” said Rains. “This promotes a can-do attitude when faced with almost any situation. They are well aware that if the task at hand needs to be completed, the veteran can be depended on to improvise, capitalize, adapt, and overcome.”

People with military experience are comfortable with driving toward more and more challenging goals. “Veterans have been groomed to take an active role in achieving their objective,” said Rains. “This is Job 1 in the United Sates military. We have the most effective and elite fighting force in the world because individuals are expected to reach higher and achieve greater levels of responsibility.” Any company that hires a veteran makes a smart decision, according to Rains. “Skill, talent, and ability are demanded from all members of the military. They become a way of life. What a wonderful benefit to any employer who receives all of this training prepackaged when hiring a United States veteran.”

FROM PLANES TO PIPELINES

Kirk Edwards served in the United States Air Force for 20 years, retiring as a technical sergeant. “I was in aviation maintenance,” he said. “I worked on six different airframes, all large cargo aircraft, and was responsible for scheduled and unscheduled maintenance. I started as a mechanic apprentice, where I learned the basics of aircraft maintenance. As I progressed, I became responsible for a small crew of personnel. As the years went by, I was assigned additional responsibility and managed a larger workforce. I was also responsible for the crash damaged or disabled aircraft recovery (CDDAR) program at several of my assignments.”

Edwards started at Williams in 2015. He is now a Operations Technician I. “During my short time with Williams, I have been exposed to a dynamic group of individuals who are eager to train and share experience,” he said. “I have begun my training on pipeline maintenance and the importance of safety when working with high pressure natural gas. I have been involved in DOT compliance activities, valve maintenance, and right-of-way maintenance.”

He acknowledges that the experience he received in the military paved the way for his job at Williams. “My mechanical background is what I believed helped me secure my job with Williams,” he said. “Additionally, attention to detail and safety was always imperative when working with military aircraft. During my interview process, I was asked about how I viewed job safety. The fact that it had been drilled into my daily routine for 20 years meant that I knew it always had to come first.”

Continuing to learn has always been important to Edwards. “In the military, I received a vast amount of classroom and hands-on training in the mechanical field,” he said. “My training and job history involved situations that could potentially injure or kill a person if I wasn’t aware of my surroundings and the activities of everyone else working on the aircraft. I came to Williams with the ability to understand schematics, maintenance instructions, and the importance of proper documentation. I had also gained knowledge of hazardous materials, industrial equipment, and the techniques and programs that are common to OSHA that help to mitigate the hazards of working in these situations.

“Also, my experience dealing with extensively damaged aircraft allowed me to think outside the box. Scenarios would arise that had not been dealt with before. I would have to formulate a plan to make the work environment safe while also adhering to maintenance instructions and safety. During such experiences, I learned that sometimes one must pause to ensure that safety is being put first.” A sharp focus has been important to Edwards’ career in and out of the military. “Attention to detail is the most important aspect I can carry over,” he said. “We are all aware that there are hazardous associated with the job. However, if one maintains attention to detail, then the foreseeable situations can be avoided and the work completed in a safe manner.

“I would also say that the fact that the job has to be completed, regardless of the difficulties, plays an important factor. In the military, we routinely moved supplies – as was often said, the beans and bullets – to the front-line troops. Supplies that they needed to complete their job. We knew that it was imperative to overcome any obstacle so the supplies could be moved.

“The same attitude can be seen with my fellow employees. Our customers rely on us to deliver the energy that makes their lives move. The attention to detail is imperative to ensure that we do not interrupt the flow of natural gas, while ensuring the safety of each other and our neighbors.”

Edwards appreciates that Williams understands the contributions its veterans provide. “From my perspective, Williams recognizes the skills that veterans gained during their time in the military,” he said. “Our ability to quickly learn new skills, adapt to new environments, and respect the hazards that surround us in the workplace are skills that not everyone possesses. Due to our history, many veterans have gained experience that will allow them to enter Williams with the ability to hit the ground running as we learn about our new responsibilities.”

“Personally, I started with de-militarizing my resume. The military jargon does not carry over into the civilian sector. After about 20 rewrites, I sent my resume to the ‘resident specialist’ on base for a review. After yet another rewrite, I started to attend the job fairs on base. I sought out the HR personnel who did not have a long line, and I asked for tips. I brought a red pen and asked them to make suggestions to my resume. I would ask them for interview tips and ways of making myself stand out at the job fairs.”

Having a quick and concise personal sales pitch is also key. “An important piece of advice was to have a strong ‘elevator pitch,’ he said. “They told me to imagine I entered an elevator with someone that could get me my dream job, I only had 30 seconds until the doors reopened and I had to sell myself. I practiced my pitch so that it was second nature; I wanted to get across my work history, skills, and personality in a short time so that they would want to ask me for my resume.

“Another piece of advice was to ask each HR person I spoke to if I could connect with them on LinkedIn. A vast network is invaluable when looking for work. It was through LinkedIn that I was discovered by Williams. Veterans can get a year of LinkedIn premium for free when they are about to exit the military, and I strongly suggest that they take advantage of it. Veterans can also utilize private companies that specialize in placing transitioning veterans into positions that line up with their work history.”

Edwards advises veteran job seekers to seek out feedback. “I started my job search well in advance,” he said. “I applied for many positions through the job fairs and personal research, and I received quite a few callbacks. I had several interviews for positions that needed to be filled before I was available. However, I used the opportunity to ask for feedback on my interview and find ways to improve how I came across. In each case, the HR personnel were more than happy to offer advice on both my weakness and strengths.

“It was during this time I found out that I had been limiting myself during my job search. The skills and training I had received were actually in strong demand by many companies, even if they did not exactly match those in descriptions of jobs the companies wanted to fill. The companies were willing to take the chance on a veteran if I could prove during the interview that I had the ability to apply my history and skills to their company needs.”

Edwards believes that Veterans have a place at Williams – and they need to be ready. “First and foremost, forget the military jargon,” he said. “Develop the strong resume, and work on interview skills. Williams is a large company, and almost any veteran could use their learned skills in a position with the company. Just because you don’t have experience with natural gas doesn’t mean there isn’t a place for you within the company.”

TIPS FROM A RECRUITER

by RENE SCHACKAI, the recruiter who hired Kirk Edwards

Interested in a Energy job? Use our job board to find one!