Each November in honor of Veterans Day, Search & Employ, will release its Top 40 Under 40 Military edition which will endeavor to recognize the top service members who are serving or have served in the U.S. Armed Forces.

Atlanta, Georgia November 3, 2013 - CivilianJobs.com, where America's military connects with civilian careers, announced the winners of The Top 40 Under 40 Military Class of 2013 today. The military-experienced individuals who make up the 2013 class were selected by CivilianJobs.com's worldwide military base newspaper, Military Transition News (MTN), and the winners are being released this week in honor of Veterans Day.

“Both hiring veterans and equipping them to find employment outside Accenture is a top priority for us,” said John Campagnino, managing director, global talent acquisition at Top 40 Under 40 Military presenting sponsor Accenture. “Accenture has welcomed many military veterans into our workforce and we are proud to help honor these 40 individuals who have served their country. These veterans serve as role models for others in the military and for those who are taking their military skills and using them to build successful careers in the private sector.”

The Top 40 Under 40 Military program recognizes the top performing service members who are serving or have served in the U.S. armed forces. They are profiled each year in the November/December Veterans Day issue of MTN. The individuals selected for the 2013 recognition are: 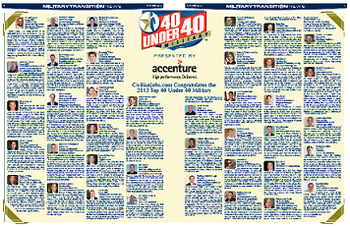 The individuals selected for the 2013 recognition are:

“Our 2013 Top 40 Under 40 Military class represents the highest of standards. They have excelled in a variety of circumstances and continued to shine under adversity. The quality of their character and their mission-first attitude makes them rising stars,” said Jake Hutchings, Director of CivilianJobs.com. “As we mark Veterans Day on November 11, we hope that recognizing these forty military-experienced leaders will help to commemorate the occasion.”

The criteria for the Top 40 Under 40 Military are as follows: • Serving or has served in the U.S. armed forces • Under 40 years old • Exemplary military performance as per their assignments and evaluations • Honorable discharge or anticipate an honorable discharge

About the Top 40 Under 40 Military

The Top 40 Under 40 Military was previously released annually by CivilianJobs.com, where America's military connects with civilian careers. RecruitMilitary, with parent company Bradley-Morris, Inc. (BMI), the largest military-focused recruiting firm in the U.S., together deliver the largest military-to-civilian footprint available to companies seeking to recruit and hire from the military talent pool.