Patriots Out of Uniform 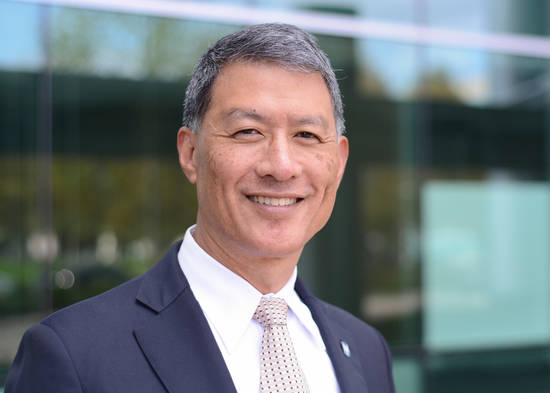 Born and raised on the island of Oahu, Hawaii, Joe Caravalho was surrounded by military bases, but it wasn’t until he was college-aged that he considered joining. He had always wanted to be a physician.

When he learned that the U.S. Army Reserve Officer Training Corps (ROTC) program offered the chance to get a degree, debt-free, while serving the country, he knew that was the route he wanted to take.

Now, Caravalho is president and CEO at The Henry M. Jackson Foundation for the Advancement of Military Medicine, where he combines his military background with his knowledge of medicine.

Elizabeth: Tell me a little about your Army experience.

Caravalho: I didn’t know much about the military until I joined, but within a month, I knew I loved it.

My career alternated between clinical medicine and operational medicine. I spent time with special operations at the tactical, operational, and strategic levels. I also trained and practiced in internal medicine, nuclear medicine, and cardiology.

After a series of assignments as a Commanding General of various Medical Commands, I retired as the Army Deputy Surgeon General and medical advisor for the Chairman of the Joint Chiefs of Staff. That was 38 years after joining.

E: What is your favorite memory from your time in service?

Caravalho: While deployed from 2008 to 2009, I worked with the Iraqi Minister of Health. We met from time to time about how to reshape the strategic direction for the health of Iraq. I never learned anything like that in medical school, yet there I was, representing the U.S. to the senior medical person in the country, making plans to help their nation.

E: How did you get hired on at HJF?

Caravalho: Just before I retired from the Army, I heard about the opportunity of president and CEO at Henry M. Jackson Foundation. I knew my experience and background made me a strong candidate, and I was eager to continue helping military medicine.

After I was selected to run the organization, my transition was relatively smooth. I retired from the Army at the end of August last year and started at HJF on the first of September.

It was a very natural transition, really. I still focus on military medicine, just from a different vantage point and with a different team.

E: What is something you enjoy about your civilian career?

Caravalho: I’m surrounded by people who are singularly focused on doing their part in helping our U.S. government partners advance military medicine. What we do ultimately leads to the creation of knowledge products, equipment, or clinical practice guidelines that will make the warfighter more resilient, agile, and survivable. You don’t have to be in uniform to be a patriot. My teammates are all patriots in every sense of the word.

E: In addition to the mission, how else does HJF support members of the military?

Caravalho: For the past eight years, HJF worked with the surgeons general from the Army, Navy, and Air Force to identify individuals who’ve demonstrated outstanding work in military medicine that year. Often, it is associated with those who’ve conducted combat operations. We recognize these individuals with the Heroes of Military Medicine award at a ceremonial dinner.

Over the last three or four years we started The Veterans Metric Initiative (TVMI), which is a longitudinal observational study focused on newly transitioned veterans.

We partner with multiple organizations that help fund this project. Currently, we’re focusing on which veteran programs, if any, the veterans use. We have assessed the veterans’ progress, as well as the impact their programs have on their overall well-being. This information gives decision-makers the tools to sustain and develop beneficial programs, and then provide them to transitioning veterans on and individualized basis.

E: What advice do you have for our readers?

Caravalho: When looking into a new career, consider the mission. Then look at the job opportunities and see if something resonates. If you don’t see something you’ve done before, think about how your military skills can be leveraged.

E: What should readers keep in mind as they transition to life as a civilian?

Caravalho: No matter what you do, in what capacity, you have signed a blank check payable to the United States for up to and including your life. Not many people have the strength of character to do that. So never discount that.

Elizabeth: What made you decide to serve?

Zeighami: I knew from a young age that I wanted to join the military one day. The first Gulf War was underway, and at school, we were learning the history of the United States. Going through the naturalization process only strengthened my love for this country. I felt that I needed to sacrifice and defend it, like those who came before me.

In high school, I met with military recruiters around town. I regularly went on runs with the recruiters and even did my homework at their office. I was committed.

However, my family wanted me to continue my education, so I applied to some California universities. I was not expecting to be admitted – my GPA and SAT scores and were not competitive. Surprisingly, I was admitted into San Diego State University which, consequently, shifted my original trajectory. Instead of joining the military right out of school, I earned a bachelor’s degree in biology and a master’s degree in organic chemistry.

All that time, I still wanted to serve my country. So, at age 31, I joined the Army as a second lieutenant. You’ve heard of people having culture shock when they transition out of the military? For me, it was a culture shock transitioning from civilian into military life. It was a very eye-opening experience. So, I understand what career military personnel feel.

E: I can only imagine! What was your military experience like?

Zeighami: I loved it. My first assignment was with the First Army Division West. Our mission was to provide fully-trained and deployable forces for combatant commanders operating globally. We developed and executed battle-focused training exercises, including weapons training, land navigation, convoy operations, counterinsurgencies, and much more.

Many of the skills I developed in the military have been applied to my personal and professional life, and they have helped me tackle many obstacles. I see them as survival tools for civilian life.

E: What advice would you give someone who is about to begin their civilian career?

Zeighami: If you’re looking towards higher education, do your due diligence and find universities or colleges that are fully-accredited. There are a lot of vocational schools or training schools out there that claim you’ll find a job right away. I would be wary of those.

A few of my friends attended similar institutions and were disappointed because the credentials they had earned were not honored.

On that same thought, don’t just study what interests you without looking into the marketability of that degree.

When it comes to looking for a job, I would also suggest not being afraid to talk about your military experience. Play up the things you learned, like teamwork and communication. You learn these values and those skills foster other traits like confidence and resilience. You bring that with you, everywhere you go.

Reza Zeighami is a military service member and employee of the United States government. This work was prepared as part of his official duties. Title 17, USC paragraph 105, provides that copyright protection under this title is not available for any work of the United States government. Title 17, USC 101 defines U.S. government work as work prepared by a military service member or employee of U.S. government as part of that person’s official duties. The views expressed in this research are those of the authors and do not necessarily reflect the official policy or position of the Department of the Navy, Department of Defense, nor the U.S. government.

Miracle-Ear is the name Americans have trusted for hearing aids since 1948....

Grow As You Advance At HCA

Many veterans may not consider careers in healthcare, especially...