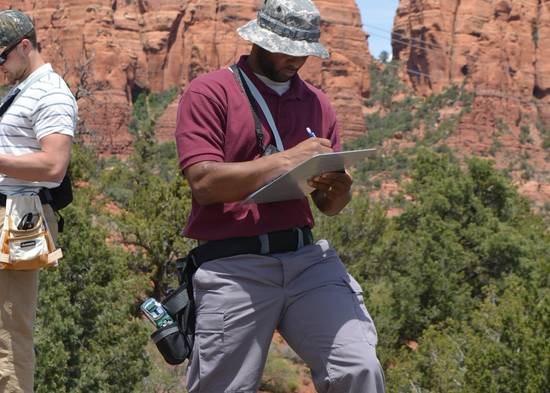 As Sexton quickly learned, catastrophe insurance adjusters help property owners in the aftermath of a disaster. They investigate claims and expedite compensation, helping people in their time of need. The benefits of a career as an adjuster include the ability to work six to eight months a year and earn six figures or more.

If a candidate is hardworking, organized, and open to travel, VAS can train them and have them field-ready in just three months. Their elite training program offers expert trainers, hands-on training, a customized laptop, field tools, and continued mentorship. Sexton said he was nervous about his next steps after retiring from the Army, but VAS made his transition from active duty soldier to VAS student to adjuster extremely smooth.

“VAS is definitely as advertised. In fact, they probably offer more than you’re currently expecting from the training, mentoring, and resources aspect. Before attending the training, I wouldn’t have believed I could have accomplished the objectives set out in the training. But through the knowledge of the instructors and the phenomenal way the training is delivered, even the most inexperienced person is provided with the tools needed to succeed. I am so grateful that VAS was available and that I was able to attend. The lessons were spot on and definitely have prepared me to be effective in the field right away,” he said.

Sexton is one of many veterans who have found success with VAS. Michael D. Babb served in the United States Army for 21 years, retiring as a first sergeant. His main responsibilities were in transportation. He is now an independent catastrophic insurance adjuster and an instructor with VAS.

“I came into contact with Veteran Adjusting School at a RecruitMilitary job fair in Dallas in February of 2015,” he said. “I had spent my military career in transportation, but had decided on changing career paths as I transitioned into the civilian sector.”

Insurance, however, was not the field he expected to join. “I had not previously heard of VAS or the career of independent catastrophic insurance adjuster,” he said. “I had chosen to attend this RecruitMilitary job fair with the idea to pursue a completely different career path and had little desire to attend school.”

“However, after speaking with the outreach coordinator for VAS and the managing director of the school, I thought that this may be just the new career path I was looking for. After doing my research and giving this career path additional thought, I applied for and was accepted into VAS for the June of 2015 class.”

Babb knows he made the right decision. “My decision has proven over and again to be one of the smartest career decisions I could have ever made in transitioning from the Army,” he said. “My training in project management and many of the soft skills learned throughout my years of military service directly contributed to my success as a student attending VAS and my career as an independent catastrophic insurance adjuster.”

One of the things Babb likes best is that his job allows for a lot of flexibility. “As an independent insurance adjuster, you have the amazing opportunity to work for yourself as a contract employee to any number of independent adjusting firms across the nation, in whichever community you decide to reside across the country,” he said. “This is great for the transitioning veteran who is planning on returning home after service to our country.

“This, too, played a high part in my decision to attend school at VAS and transition to a career as an independent adjuster, since I could select my next destination after the Army without regard to job availability or location. It is a career in which you can literally work from anywhere in the country as long as you possess the willingness to ‘chase the storm’ during the storm season from March to November, typically every year.”

Babb encourages veterans to keep an open mind when considering post-military employment. “The biggest advice I would have for the transitioning veteran is to take full advantage of all the great resources we have at our fingertips as veterans, and to keep a broad perspective when looking for a new career post-military,” he said.