Military Service is in High Demand at GardaWorld 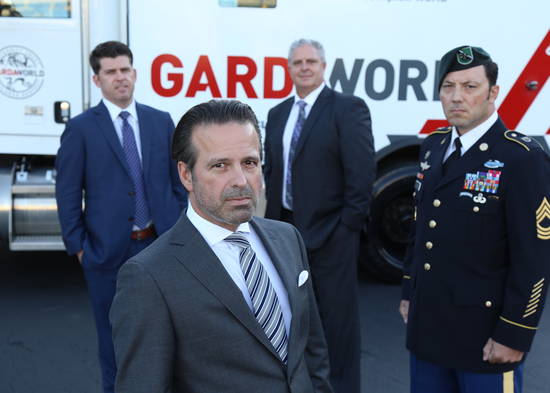 We asked GardaWorld Cash Services’ Chief Executive Officer Stéphane Gonthier and Chief Transformation Officer Trent Bonnell a few questions about the company’s passion for hiring veterans. Here’s what they had to say:

Why does GardaWorld hire veterans?

SG: We want to hire people that want to make a difference. When we hire veterans, we know we have someone who values loyalty and integrity. We believe in investing in our people and we want to see as many veterans move up into management as possible.

TB: We are looking for hardworking and disciplined employees, which is why we have had a lot of success with hiring military veterans. We want smart, thoughtful leaders. In addition to cash services and armored transportation, GardaWorld provides protective services. From a job perspective, it’s a seamless transition. In the military, you’re accustomed to wearing a uniform and carrying a weapon. In many of the jobs at GardaWorld, you do the same thing.

What makes GardaWorld a good place for veterans?

TB: We are on a mission to transform the industry. Joining our ranks means joining a company that is pushing to take this industry to the next level. When you come to work for GardaWorld, you have the opportunity for professional advancement in a growing company. We started working with RecruitMilitary and began a relationship with military bases in order to connect with the servicemembers who are transitioning out. Our 220 branches in the United States can access the veteran database at any time, which makes it easy to find veteran talent when there is an opening. We’ve hired over 600 employees through our connection with RecruitMilitary.

SG: We have quite a few veterans in management or leadership positions. This creates a culture that is familiar to new employees with military experience. We also have programs in place to help new employees acclimate into the company.

What are the biggest opportunities at GardaWorld?

SG: We are a fast-paced, fast-growing company. We are hiring hundreds of employees every quarter, anything from corporate level employees to supervisors to senior VP positions.

Vice President, Transformation, Karl Buchanan, has been at GardaWorld Cash Services for a little over a year. In this role, he is responsible for working with senior management to turn facilities around through process improvement, change management, strategy development, and implementation. He is also in charge of the military recruiting pipelines.

I asked him some questions about his job, his company, and his own military experience:

What did you do in the military?

I served in the U.S. Army for five years as a military intelligence officer. I was honored to have the chance to work underneath leaders like General David Petraeus and General Barry McCaffrey.

How has military experience influenced you in your current role?

When you created the military recruiting pipeline, what kind of candidates did you have in mind?

When you look at what we do, it made sense to find people who can carry weapons, look sharp, communicate well, and be vigilant. We wanted people with discipline and a security-centric mindset. Our military pipeline is the perfect positioning to find these types of people for these types of jobs.

GardaWorld is currently connected with all the transition centers across the country, where our regional recruiters will go directly into the military bases and recruit people straight out of the military into our company.

Why is GardaWorld good for veterans?

We are a veteran-centric company. In eight months, we have hired over 1,000 veterans. Had it not been for this pipeline and the vision of the CEO, we might have struggled to fill all these positions. Leaders change culture. By bringing in military leaders who bring a military-based mindset, we are recreating the culture at GardaWorld.

Favorite thing about working for GardaWorld?

The leadership of the company is forward-thinking. They respect the military and they are looking to add more military to the ranks.

The first time Jonric Jones enlisted in the U.S. Army was in 1992, right after high school. He craved structure and strong leadership and hoped to go to as many special military schools as possible. But it was not meant to be. At that time, the military wasn't spending the funds to send troops to specialized training. When his time in service was up, he decided not to reenlist.

"I didn't get to do most of the things I’d hope to do when I enlisted, which left me feeling let down. I decided to go to college and get my career started," Jones said.

But back in the civilian world, he experienced culture shock. "I was working two jobs while going to college full-time. I worked very hard and was surprised at the lack of discipline and strong leadership around me. It was discouraging.

"I had grown accustomed to the way the military worked – the leadership, the discipline, the teamwork, the sense of direction – and, suddenly, it's everyone for themselves," he explained. "So I joined back up with the Army on my birthday in 1997.”

This time, he made sure he had Ranger school in his contract. “I was sent to the 1st Ranger Battalion in Savannah. I appreciated the high standards. It was challenging, but refreshing. The brotherhood, teamwork, and leadership was top notch."

He went on to become a team leader at 1/75 Ranger Regiment. He was also an instructor at Fort Drum for air assault, pre-Ranger, and close quarters combat. He was a Special Forces Engineer (18C); Special Forces Intelligence (18F); and Special Forces Operations Sergeant (18Z) – all during this second tenure in the Army. He was also with the 7th Special Forces Group (7th SFG) in Fort Bragg, with which he deployed on four back-to-back combat missions to Afghanistan and Iraq.

In 2007, Jones was serving in Iraq when his vehicle was hit with a rocket-propelled grenade. He sustained burns to his leg and an injury to his back and neck. He was sent to the Walter Reed National Military Medical Center for a neck surgery, returning to duty a month later.

As 7th SFG transitioned to Eglin Air Force Base, Jones transferred to MacDill Air Force Base, where he worked with Special Operations Command Central (SOCCENT). While with SOCCENT, Jones deployed two more times to the Middle East. Upon return from his last deployment, his injuries began to reappear.

"Through 2014 and 2015, I was a master sergeant, and I had to have four more surgeries for my neck and upper back," Jones said. "I was placed in a Warrior Transition Unit (WTU) back at Fort Bragg. I had wanted to remain in the military for the long term - until I didn’t meet the age requirement. But I found out that I was going to be [medically] boarded out." By that time, he had served in the Army for 20 years.

While in the Fort Bragg WTU, Jones met Cedric Minor, WTU transition coordinator. "Mr. Minor was one of many people in the WTU who helped me prepare for civilian life," Jones said. "The WTU offers career-enhancing opportunities for wounded warriors. They have different courses and certifications as well as internship programs for potential future career fields.

“Mr. Minor suggested that I attend the Fort Bragg RecruitMilitary job fair, which helps transitioning service members - as well as veterans - in search of promising careers after the military. The Fort Bragg RecruitMilitary job fair is where I met Karl Buchanan. He spoke my language and understood my background. I was a perfect fit for the security industry,” Jones said.

At the job fair, Jones was hired as an intern on the spot. "Through the internship program the WTU offers, I was able to work as an intern for six months at a local GardaWorld branch. I then interviewed for a vacant security manager position. After a competitive interview process, I was selected and hired on full-time as a corporate security officer. I was the first military intern at GardaWorld," said Jones.

Ready to Meet the Challenge

Now, Jones is one of eight regional security managers throughout the country for GardaWorld. He oversees ten branches throughout Virginia, the Carolinas, and Georgia.

"Similarities between GardaWorld and the military are numerous. The seven Army values – loyalty, duty, respect, selfless service, honor, integrity, and personal courage – line up with my mission here," Jones stated. "I like working for GardaWorld because this company sees teambuilding as a main focus. We want employees who can follow policy and procedures. In this industry, that is a must."

Jones's job is demanding. "I travel frequently and sometimes work long hours. But servicemembers are used to being challenged. We’re adaptable, and we don't accept failure. With strong leadership and a good team, you know you can make a difference. Everyone here wants to see progress, growth, and a positive transformation.

"I recommend to anyone getting out of the military: Know how to sell yourself. Become your own salesperson. Make sure you are selling the best possible product - prepare yourself by accomplishing your educational goals and constantly push for self-improvement. Seek out professional growth opportunities," he said. "Your civilian counterparts are going to be competitive. Make sure you are ready to meet that challenge."

GardaWorld is a privately-owned security services company that offers a wide range of highly-focused business solutions, including leading-edge security services and cash services. The organization operates across a broad range of sectors, including financial services, infrastructure, natural resources, and retail. Headquartered in Montreal, Canada, GardaWorld employs 62,000 highly-trained, dedicated professionals that serve clients in North America, Africa, and the Middle East.