RecruitMilitary Congratulates the 2017 Top 40 Under 40 Military 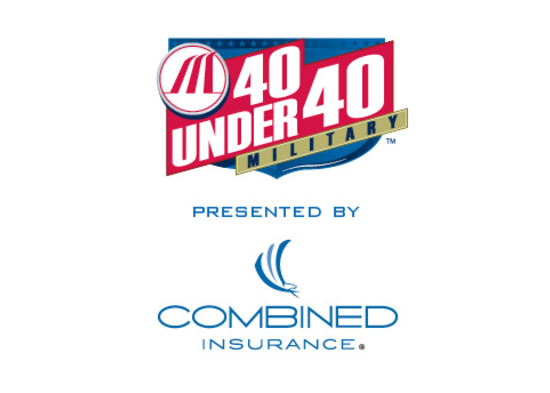 The Top 40 Under 40 Military is a list of military members who have shown exceptional resolve and achieved significant milestones – both in their career and personal lives. The 2017 designees come from all branches, but each demonstrates the persistence and selflessness one consistently finds in this community.

This year, the Top 40 Under 40 Military awards are sponsored by Combined Insurance. “Combined Insurance has a proud history of supporting veterans and those with a military background by providing meaningful career opportunities and giving back to charitable organizations that support our nation’s servicemen and women,” said Bob Wiedower, vice president of sales development and military programs at Combined Insurance. “We salute these 40 individuals and thank them for their service."

We would also like to thank our distinguished panel of judges:

Providing humanitarian aid, fighting for social justice, and mentoring up-and-coming generations are just some of the ways that this year’s cadre of Top 40 Under 40 recipients are giving back to the world – over and above their military service to the nation.

When it comes to finding unique and impactful ways in which the military community changes the world, many people probably think of wartime heroics. But this group has a different scope. One person and one mission at a time, nearly all of the 2017 winners are active volunteers or have used their knowledge gained during military service to improve the lives of others.

Take, for example, Navy Lieutenant Jesse Rond, whose college experience with Engineers Without Borders was life-changing. His club developed a relationship with an impoverished village in Nicaragua whose health clinic was impeded by an intermittent water supply.

“Fellow engineering students and I responded by designing a system capable of storing water during periods of oversupply and supplying during times of drought. We then traveled to Nicaragua to implement the system, which enabled the clinic to remain open for health services, even when city water was scarce,” he said.

Another example is Air Force Senior Master, Jacob Messina, who works with the Explorer program of Sumter, SC. This program teaches teenagers the basics of good citizenship and moral responsibility within the community. Messina uses his private pilot’s license to fly youth around the area and expose them to the many ventures of aviation. As a result, in a four-month span, Explorer program enrollments jumped from four young people to 23. Six Explore members have since enlisted in the Air Force.

Many of the veterans recognized in the Top 40 Under 40 Military have found a way to continue to serve, even after their military careers have ended. Former Air Force Captain Jocelyn Mitnaul now serves her community as a law clerk at the North Carolina Supreme Court.

In the six months since she has been out of the Air Force, Mitnaul has volunteered with Habitat for Humanity; participated in Lunch with a Lawyer, through which she mentored a high school girl over several lunches; and coached a high school girls’ mock trial team during a day camp called Camp Confidence. Mitnaul is also active in the North Carolina Bar Association’s Young Lawyers’ Division, Military and Veterans Affairs Section, and Minorities in the Profession Committee.

“When I was medically retired from the Air Force in January 2017, I was devastated,” Mitnaul said. “However, my father reminded me that I can still serve, but my ‘uniform’ will now be a civilian suit.” These are simply three of the stories; there are many more. We are pleased and humbled to present the Top 40 Under 40 Military honorees. Please read on to learn more about these remarkable men and women.

Military Service is in High Demand at GardaWorld

GardaWorld is a privately-owned security services company that operates across a broad range of...

Surviving the Firing Squad: 6 Tips for a Successful Group Interview

Does the thought of having to impress a room full of people cause fear to seize your chest?...