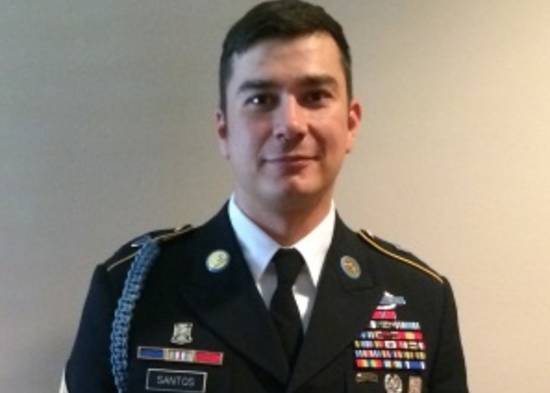 The last thing Victor Santos expected on April 25, 2017 was to leave the RecruitMilitary Fort Bliss Veterans Job Fair with a new suit and a potential new job. But that’s exactly what happened.

Through Texas Workforce Solutions, Santos saw a flyer about a RecruitMilitary hiring event at Fort Bliss, where Farmers Insurance® was giving away suits for veterans who needed them. Santos arrived early, and listened to a Farmers Insurance employee address the crowd about her military experience and transition. “I went straight to the Farmer’s staging area. There were 100 donated suits and a tailor to measure and perform on-the-spot alterations. I found a two-piece suit that fit me perfectly,” he said. “It was one of the coolest things I’ve ever seen.”

From Student to Sniper

Santos served in the U.S. Army from 2002 until 2016, when he separated as a staff sergeant. Growing up, he’d gotten into some trouble and ended up at Camp Beauregard as part of the Louisiana Youth Challenge Program run by the Louisiana National Guard. The program offers at-risk adolescents an opportunity to change their future and teaches discipline, leadership, and responsibility. Five days after graduating from the program, he enlisted in the Army.

He was assigned to an Army infantry unit, where Santos honed his solid marksmanship skills. “I’d always loved shooting, and I excelled at it. I was asked to attend sniper school. There, I learned precision shooting, how to judge distance, and how to make the first round the one that makes a difference,” he said.

Santos put those skills to use in five deployments for Operation Enduring Freedom and Operation Iraqi Freedom: two to Iraq, two to Afghanistan, and one to the Horn of Africa.

Always a goal setter, Santos yearned for the next challenge before long. “In infantry, the goal is to attend Ranger school and become a Ranger-qualified leader. In Army units, that’s what separates you from your peers. You’re given more responsibility on combat deployments, you receive tougher missions, and you’ve earned the trust and respect of your superiors,” he said.

The Army’s premier four-phase leadership course is notoriously challenging, but Santos was up for it. Out of his 120-soldier company, he was one of 20 members sent to Ranger school. Of those 20, he was one of two to graduate. “Ranger school taught me to believe in myself, keep myself in control, and win the day,” he said. “I also learned that your mind can quit long before your body does.”

The Value of a Mentor

Santos credits strong mentors with much of his success. “The team leader, Corporal Knapp, had us conduct battle drills. He was the epitome of professionalism,” Santos said. “He told us he’d train us to be just as good as he was.”

Knapp and Santos remain close. “He was the greatest role model to have and I learned so much from just watching him. He taught me to be tough and to never let people get away with anything. A team leader must shape and mold individuals into one team. He once said that if your soldiers don’t hate you, then you’re not doing your job. Years later I realized just how much I’d learned from him.”

Santos strived to pay that knowledge forward. “I originally planned to serve for four years and then go to school. But I got promoted and advanced very quickly. I decided that I couldn’t take all that knowledge with me without sharing it. I wanted to give others the exact experience I’d had, because it made me who I am,” he added. “Knowledge is only powerful if it’s shared,” he said. “Leaders must communicate to those below them. The more they know, the more confident they are to carry on.”

Santos went on, “If you put commitment and a sense of pride into what you’re doing, you will get attention in a good way. That’s what happened to me.”

Santos spent the last two years of his service as a Ranger instructor, teaching leadership, small unit tactics, and combat techniques at the Mountain Phase of the U.S. Army Ranger School at Camp Frank D. Merrill in Dahlonega, Georgia. Then, in November 2016, he separated from the military and began his life as a civilian in Fort Bliss, Texas.

He began going to school and was working towards becoming a paramedic, but his savings began to run low, necessitating a different route. That was when he found out about the RecruitMilitary Job Fair.

At the job fair, Santos met with Farmers and received his suit. He talked with a number of the employers in the room before connecting with a recruiter from Vinnell Arabia, a company with which he was unfamiliar. His background as a Ranger and sniper was just what Vinnell Arabia wanted for their training developer role. Santos applied right away. The very next day, Vinnell Arabia offered Santos a job. He reported for duty in June 2017.

Santos is grateful for the Fort Bliss Veterans Job Fair and everyone who helped him on his journey. “Farmers Insurance gave me a suit, which I can't thank them enough for. Vinnell Arabia was a company I hadn't even heard of until the event, and the position I have now is exactly what I wanted. I seriously can't say enough good things about the career fair,” he said.

Now, he gives back. “I passed on information about Vinnell Arabia to my friends. Two of them have applied,” he said.

Santos believes that his transition might have been smoother had he planned better. “Transition assistance has gotten better, but there are still things you can do,” advised Santos. “Do your homework and think about what you want to do. If you think you may want to work for the government or in law enforcement, be aware that it can take months to get on somewhere. Factor in school and the cost-of-living. Start getting your resume together and work on any certifications you may need. You know when you’re getting out way ahead of time, so don’t wait – have a plan.”

How Do Exhibitors Measure Success?

What makes RecruitMilitary job fairs worthwhile for the employers that exhibit? What are they...