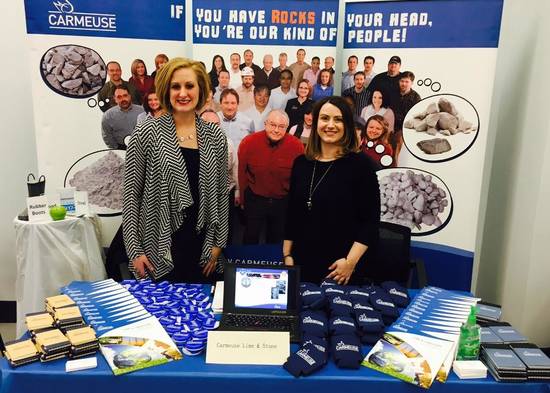 Understanding the role of each military branch, the skill sets that come from each, as well as rank structure and the roles of military occupational specialties (MOS) are some of the barriers many civilian recruiters may face when attracting veterans to their organizations, according to Amanda Prestwood. Prestwood is the corporate human resources manager with Carmeuse Lime & Stone, and is responsible for the company’s talent acquisition and strategy.

Carmeuse Lime & Stone is a leading manufacturer of lime and limestone products used to benefit the environment, and are used in steel manufacturing, power generation, road construction and land development, water and waste water treatment, pulp and paper production, and more. The company employs up to 2,000 workers across 28 production facilities in the United States and Canada, with North American operations headquartered in Pittsburgh.

“There’s so much jargon in the military that recruiting veterans requires an extra level of probing,” Prestwood said. “If a candidate tells you they worked as a 91B (wheeled vehicle mechanic) in the Army, don’t let that shut down the conversation. Go deeper by saying something like, ‘Tell me more about that. What were your duties?’”

In late 2016, Carmeuse connected with RecruitMilitary to plumb its expansive database for candidates. Fast forward to spring 2017 and enter Mike Strunck. A former Army officer and company executive officer (XO), his logistics background made him a potential fit for a role as an energy buyer with Carmeuse.

After contacting him by phone, Human Resources Generalist Audra Beatty invited Strunck to stop by the Carmeuse booth at the RecruitMilitary Pittsburgh Veterans Job Fair, which happened to be taking place the next day. That request was a kind of test in and of itself. What level of initiative would he take? Would he come to the event?

As it turned out, not only did Strunck show up, the meeting went so well that he later landed the job. “We wanted to see how he presented himself. He was clean-cut and confident, with good eye contact and a good handshake. He had resumes on hand, and had done a little homework about us,” Beatty said. “It was almost like a warm introduction for his formal interview. Going forward, we will now encourage our recruiting team to search potential candidates ahead of a hiring event and invite them to come.”

“Veterans form a huge pool of talent at Carmeuse,” said Prestwood. “Our company is 157 years old and has a long history of hiring military. It’s all about the values they hold. Veterans will find the same types of values here at Carmeuse: a place where a company is willing to invest in them long-term, where there is opportunity, and where promotions and new skills can be developed.”

Beatty noted, “Even though a veteran may not have ordered and arranged fuel sources in the past, he or she may have coordinated millions of dollars of equipment. They just need training on industry-specific roles. But they already have the leadership and are driven for success.”

“Veterans are very committed and possess high levels of initiative and regard. Coming into the safety culture here at Carmeuse, they have already proven that they can think beyond just themselves,” added Prestwood.

Prestwood conceded that one of the hardest parts of her job is helping veterans realize the many strengths they bring to the workforce. “They are already leaders, and they can be trained to our processes,” she added.

Beatty happens to be a military spouse whose husband is a sergeant in the U.S. Army Reserve. Carmeuse employs many other veteran spouses, sons and daughters, and relatives of veterans. Carmeuse employs 150 veterans in the U.S., which represents about 9% of their workforce. “Carmeuse, as an employer, works hard to understand what military life is and was like for current and former servicemen and women. Through that understanding we can leverage and transfer their skills to our workplace,” Prestwood added.

“Veterans are not always good at selling themselves,” Prestwood explained. “Candidates frequently approach me at a job fair and say, ‘I was infantry – I don’t have any other skills.’’’ She believes that is where that extra level of probing and redirection comes into play. She often steers the conversation by saying, “I’m sure you have experience in leadership, or have faced difficult situations where you’ve overcome adversity or had to step up to a task.’” This tactic helps many veterans open up, and provides an opportunity to frame Carmeuse’s values: a culture of safety, respect, and long-term employment.

Beatty acknowledged that many resumes cross her desk. Her advice for standing out? Use a clean format that tells a story. “As military roles overlap, things can get muddy. The clearer, the better. Leave out excess jargon. And craft each bullet as if you were presenting it to get a raise because of that accomplishment,” she advised.

At job fairs, veterans should avoid saying things like, “I need a job as a mechanic.” Instead, she advises telling recruiters what you can bring to the organization “Explain your background; tell them what you can do for them; and ask if there are any openings for your skill set,” she said.

Strunck is already successful in his new workplace. “He is asking intelligent questions and starting to put it together. He has a fresh perspective and is already thinking of process improvements that can be made,” said Prestwood.

Strunck’s manager, Andrew Fluder, said, “[Strunck] has been doing very well in his short time as the new energy buyer. He has quickly jumped into multiple projects, with a focus on improving current processes and assisting others in the organization. During a recent number of site visits in Virginia, [Strunck] quickly engaged with the operations and management teams, asked questions to better understand their challenges, and begin working towards developing a solution. Although we are just a few months in to him entering this new role, he’s quickly working to establish himself as a contributor to the team.”

If the word “manufacturing” makes you think of giant factories full of grimy, noisy machines...

Haworth Inc. manufactures a wide variety of workplace products, including...

For more than 65 years, engineers have turned to Tektronix for test, measurement,...