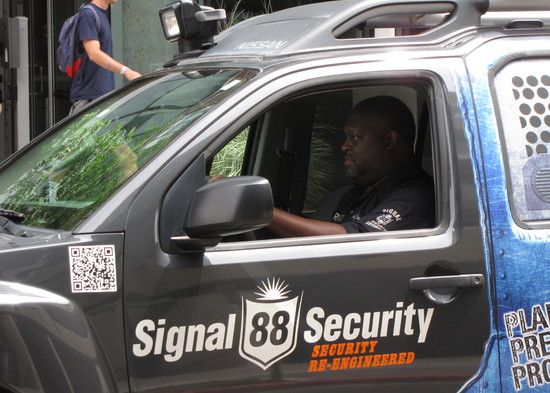 Signal 88 Security is a security franchise company for residential, commercial, retail, and institutional customers. Founded in 2003 and built on the principle that safety is a basic human right and need, Signal 88 offers customized services to keep communities safe. This includes the company’s unique patrol method — in which a Signal 88 Security vehicle comes on-site multiple times a night to scope out the designated area — as an effective and economical means to deter crime. Headquartered in Omaha, Nebraska, Signal 88 launched its franchise opportunity in 2007 and currently has more than 170 locations run by local owners and operators nationwide and internationally.

In the past, Signal 88 Security has held contests for military veterans with hopes of starting their own business. The organization gave the opportunity to win up to $10,000 in start-up money through their contest, Operation American Dream. Signal 88 Security is a great fit for veterans who are transitioning back to civilian life, as security is close to the military skill set. The emphasis on protecting and serving still applies — but instead of serving our country, at Signal 88, one serves their community.

Military experience lends itself well to the qualifications Signal 88 Security looks for in new franchise partners. The company wants team captains and people who are willing and able to make big decisions. To recruit members of the military community to become franchise owners, the company offers active-duty and honorably-discharged veterans a 10 percent discount on the franchise fee.

Derrick Dancy served in the United States Navy for 20 years. He served in Iraq and Kuwait as part of Operation Iraqi Freedom and Operation Enduring Freedom. After retiring from the military in 2010, he moved from San Diego to Tucson, where he opened a Signal 88 Security franchise. To Dancy, it was the opportunity to continue to protect that made Signal 88 so appealing. But he was not just easing from one career to the next. While opening the Tucson office, Dancy began studying at the University of Phoenix where, five years later, he graduated with a degree in management.

Signal 88 Security not only offered a business opportunity for Dancy, but also a sense of community. Most - if not all - Signal 88 franchisees have members in their organization who have military experience. Dancy tends to give an extra look to veteran applicants, because he knows they bring efficiency and experience to the job. Currently, Dancy has four veterans on staff.

When it comes to transitioning from the military to the civilian world, Dancy knows that veterans will be ready. “I suggest that (the veteran) thoroughly research whatever they are going to pursue in civilian life,” he said. “Everything will work out if the preparation and ambition is there.” Military experience is definitely a plus when it comes to Dancy’s line of work. “I fell back on my military training, which was very helpful when trying to get into the security-based business,” he said. “The training and knowledge I gained in the military helped immensely when it came to the operational side of things. Depending on the rank of a departing member of the military - typically E-7 or above - he or she is fully equipped to own a franchise like Signal 88.

“A lot of the Signal 88 Security units are owned by veterans and law enforcement personnel,” Dancy said. “They work on the same scale – in the military, your job is to protect and serve on a global spectrum, while law enforcement works on a more local level. Both entities do the same thing to reach the same result of taking care of people. I've found that transitioning military servicemembers have the ambition and ability to succeed at my organization just like they did in the military.”

Another benefit for former military working for Signal 88? “If a servicemember comes in as an employee, it's likely that placement will be at least assistant manager. Veterans have the ability to do ground-level security work, but they have the skill to work in an executive role, gain upward mobility, and even start own their own franchise. Aside from the applicable work the franchise sets them up with, Signal 88 Security offers veterans a community of people with similar values and a familiar work atmosphere” Dancy explained.

As for those leaving the military, Dancy encourages them to think big. “Don’t limit yourself to working a 9-5 job,” he said. “Don’t be afraid to take on the challenge of working toward a goal of opening your own business. Don’t sell yourself short.”