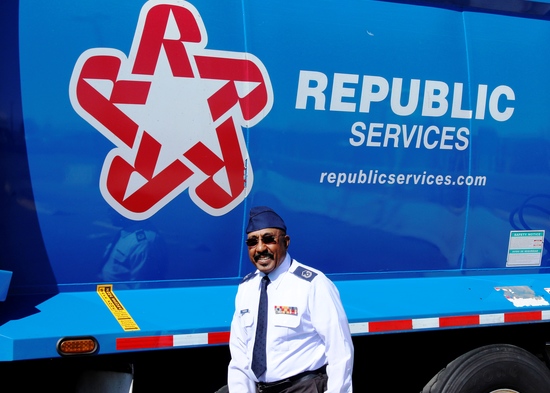 Republic recognizes that, during their time in the military, veterans gain valuable life experiences and skills that positively impact their personal and professional lives. Republic actively recruits and hires individuals transitioning from military life, as well as those who served and protected our country years ago. In 2015, approximately 30 percent of the managers Republic hired identified as veterans.

Joseph Thurmond is Republic’s area manager for driver training in Las Vegas, and a veteran of the United States Air Force. He joined the military in 1957 and served for 25 years, retiring as a master sergeant. During his early years, he trained in many phases of transportation, including small trucks and heavy equipment.

In 1965, Thurmond received the military’s Driver of the Year award for the Pacific Theater. Later in his career, Thurmond trained for the demanding task of weighing and balancing aircraft. This training led to him qualify as an airport operation chief, enabling him to oversee small airports and airfields in outpost areas.

Thurmond joined Republic Services in 1993 as a residential disposal truck driver. In 2004, he was selected as a driver trainer in Southern Nevada for a group of nearly 1,000 drivers.

By 2010, Thurmond was promoted to area driver manager, expanding his areas of responsibility to include sections of Nevada, Utah, and Arizona. “I train newly hired drivers, mentor and work with senior drivers, and proactively engage drivers to maintain a safe fleet,” Thurmond said. “My job is not all about driving. It is about developing a complete employee that drives, provides great customer services, and is reliable and dedicated to the company.”

Thurmond’s military experience also taught him how to be a thoughtful listener, which is an important skill as a trainer. Thurmond believes that he is successful in his job, in part, because of how effective it can be to pause a few moments before speaking. “Good listening does not just happen,” he said. “You have to work at listening every day and at every opportunity when communicating at work and at home.”