Schneider: Opportunities by the Truckload 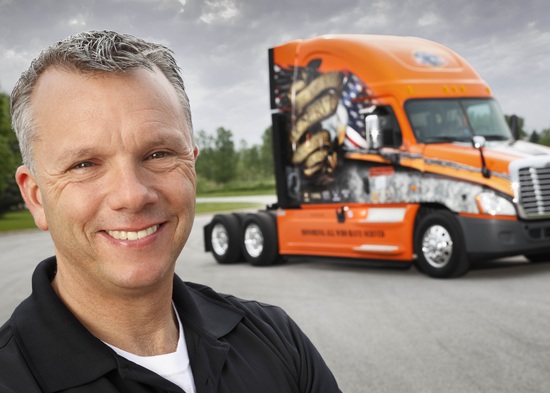 Schneider, one of the largest truckload carriers in North America, is adding positions nationwide. The company offers a variety of career paths, and there is plenty of opportunity to grow in all of them. Schneider's top five transportation jobs for transitioning military are:

Schneider provides truckload, intermodal and logistics services in several categories, including regional, long-haul, expedited, dedicated, tanker, brokerage, cross-dock logistics, supply chain management and port logistics. The company is ranked a top-paying carrier by the National Transportation Institute, and with over 75 percent of drivers getting home weekly or better, Schneider provides professional opportunities that meet the need for work-life balance.

Schneider is a $4 billion business with 11,650 company drivers and 18,132 associates worldwide. Over 28 percent of the associates have military backgrounds, and 278 of them serve in the National Guard or Reserve forces.

Military Associates from the Start

In 1935, company founder Al Schneider, a longtime member of the Wisconsin National Guard, sold the family car to buy his first truck. Soon after, he turned an old horse stable into a storage facility, thus beginning his experience in transfer and logistics.

As Al Schneider’s business increased, so did his need for quality associates, and he began to recruit fellow members of the National Guard. Ever since, the company has recognized that military personnel are hard workers and natural leaders, making them valuable employees.

Schneider has a great track record in support of veterans:

Schneider knows that military members are mission-oriented, highly skilled associates who play a big role in its success. Veterans are accustomed to receiving a set of tasks and then accomplishing these tasks, safely and correctly. They are also experienced with being away from home – though many of the company’s options include a good balance of home time. Additionally, Schneider’s core values – safety, integrity, respect and excellence – are values that veterans will find familiar and comfortable.

Schneider has created several programs designed to attract and retain veterans and servicemembers.

A Leader and a Veteran

At the top of Schneider’s driver recruitment chain of command is Rob Reich, a United States Army veteran. For the past three years, Reich has been the company’s senior vice president – equipment, maintenance and driver recruiting. His responsibilities include:

Reich joined Schneider in 1992 as a maintenance team leader in Reserve, Louisiana. He held many leadership positions, including shop manager and regional maintenance manager, and his roles included oversight of all Schneider maintenance shops supporting dedicated customers.

In 1999, Reich began his work with Schneider human resources as the director of workforce planning and development. In 2005, he became vice president of enterprise recruiting, where he was responsible for all driver, office and shop recruitment. He later served as vice president of driver recruiting.

Before joining Schneider, Reich was as a lieutenant in the Army and a member of the 1st Cavalry Division at Fort Hood, Texas, where he served as a communications platoon leader and executive officer. When he led a 63-soldier signal platoon in Operation Desert Storm, he proved himself a dedicated leader by bringing his troops home with no casualties.

A Sense of Service and Accomplishment

Chuck Ceccacci is one of Schneider's safety and training managers and a veteran of the Marine Corps. He joined the Marines in April 1989, completed boot camp at Marine Corps Recruit Depot Parris Island, South Carolina, and then reported to the School of Infantry for Marine Combat Training at Camp Lejeune, North Carolina.

He left active duty as a sergeant in 1997, and joined Schneider that same year. In the years that he has worked at Schneider, he has held many different positions: company driver, training engineer, operation support representative, classroom instructor, and safety and training manager. He also became an owner-operator and leased his business to Schneider.

Ceccacci’s current responsibilities include regulatory compliance and safety of owner-operators assigned to port operations coast-to-coast. He also performs orientations for new owner-operators who lease their businesses to Schneider.

He works to ensure compliance with regulations of the Federal Motor Carrier Safety Administration, an agency of the U.S. Department of Transportation. In addition, he provides continuous training at all of the company’s port operation locations.

“The highlight of my career here at Schneider was being nominated to operate the military memorial truck for 13 months,” said Ceccacci. “The 2013 ‘Ride of Pride’ truck is a truck series designed to be rolling tributes to members of the United States military, past and present. I drove around the country participating in veterans and military functions, including memorials and memorial rides in honor of our nation’s heroes and their families.”

Ceccacci did not plan to go into the transportation field upon leaving the military, but he is glad he did. “I was destined to become a law enforcement officer, as do many active-duty military members leaving active service,” he said. “It seemed like a natural fit. I found trucking completely by accident after seeing a videotape showing Schneider drivers being interviewed. I thought to myself, I have seen the world, so why not see my country that I spent so much time serving from behind the wheel? And get paid to do it. I looked into it and, in no time, I changed my mind on my career choice.”

Ceccacci said he enjoys working at Schneider because the company’s core values are so similar to those of the Marine Corps. “The skills I learned as an active-duty Marine and working in stressful environments such as a flight deck of an aircraft carrier made me not only think about safety, but to start living a life that put safety first,” he said. “This was yet another huge reason I chose Schneider as my next career move. Safety is the company’s number one core value – Safety First and Always: We have a responsibility to our associates, customers and the community to operate safely. Nothing we do is worth harming ourselves or others.”

The leadership skills Ceccacci developed in the Marine Corps are also valuable at Schneider. “In the Marines, I had to adjust my leadership techniques to many different personalities and attitudes,” he said, “which is exactly the same here in my current role.”

Ceccacci believes Schneider is a great place to work because so many veterans are employed there. “This company is by far one of the best fits for a veteran,” he said. “The driving force alone is about 28 percent veterans. In addition, many of my direct leaders that I have had in my career here have been officers and senior staff NCOs. Schneider runs like a well-oiled machine, much like the military.”

He advises veterans to have no fear when it comes time to join the civilian workforce. “I was nervous, actually scared, initially to leave active duty,” he said, “something about the military life that only veterans would understand. The camaraderie and team that we all belong to was hard to leave. Someone there always had your back. I suppose that is why many choose the career of law enforcement or fire service.”

When it comes to the job hunt, Ceccacci wants candidates to know that their veteran status gives them an edge. “As a veteran, you will stand out,” he said. “Civilians in most organizations do look toward veterans and even expect them to stand out. You earned your place in society to be a part of something that very few have. Capitalize on it.”

Veterans should showcase their military experience when they apply for a job at Schneider, according to Ceccacci. “Use every bit of your military experience as leverage to land a spot here,” he said. “No matter what role you are shooting for, your military background and leadership skills will benefit you here. For me, my initial role as a driver associate for Schneider was perfect. I was able to mentally decompress from the active-duty tempo that was my life for so many years. Driving gave me more than enough challenges to keep my need to complete a mission at hand. I firmly believe that is why the trucking industry has always attracted military personnel. The sense of service and accomplishment is right here.”

Opportunities In Transportation And Logistics, Jobs for Veterans

Con-Way Truckload: True To The Troops

A Good Home At Con-Way

Con-way Truckload driver Darrell Bogan did not expect to be selected for the honor of driving one...