“Let People Know Your Worth” 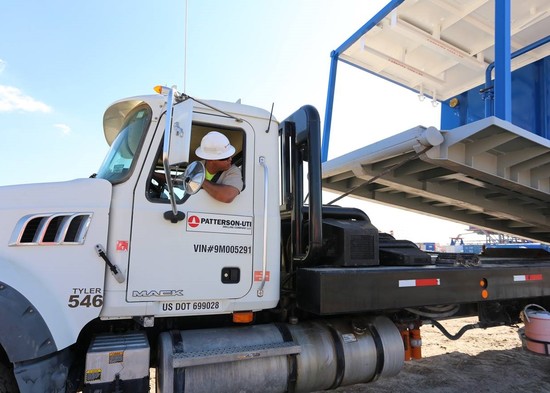 The company has approximately 5,500 employees working throughout the continental United States. Opportunities include all rig-based positions, operations management, trucking, maintenance, health-safety-environmental advisor, and human resources. Certain employees work half of the year, following a schedule of 14 days on and 14 days off.

Patterson-UTI actively recruits servicemembers and veterans. Company recruiters visit anywhere from four to six military installations per month, and they frequently interview and hire on the spot.

In 2015, 47 percent of all new hires had military experience. The company has found that veterans are diverse, skilled, talented, and dependable leaders who are proactive, have the willingness to learn, and follow standard operating procedures.

The company looks for individuals who are team-oriented, performance-focused, highly trainable, and have excellent leadership experience. All of those characteristics are common among the veterans at Patterson-UTI. The company also finds that veterans share its commitment to working safely and ensuring that their co-workers do the same.

Gregory Black served in the United States Army for seven years, separating as a staff sergeant. He worked as a heavy equipment operator; and he trained, led, and mentored soldiers.

He is now a heavy equipment operator at Patterson-UTI. He joined the company in September 2014 as a traffic control flagger. Within 6 months, he was training to operate a tandem – the term used in the oil fields for a tandem-axle flat bed truck. By his eighth month, he was a full-time tandem operator. Black considers this accomplishment to be his biggest milestone at Patterson-UTI because, as he said, “it showed me that my hard work and knowledge did not go unnoticed.”

On the job, he moves drilling-rig components. He oversees the loose lifting gear – eye bolts, hooks, shackles, etc. – for the entire rig-up facility and ensures that the gear is inspected regularly.

And Black is working to become an even more valuable employee. He is training for certification in cranes by the National Commission for the Certification of Crane Operators (NCCCO).

Black attributes his civilian success to skills he developed in the Army. “I am a very disciplined person who does not have to be constantly supervised,” he said. “I also have very good communication skills as well as leadership skills. School in the military gives you a lot of tools for success. You have to know when and where to apply them.”

A good attitude also helps. “I am a loyal employee who can be trusted with any task,” said Black. “I always keep a positive attitude, and I am very open-minded to everyone's opinion regarding tasks at hand.” One of the things Black likes about working at Patterson-UTI is that the company understands veterans and their military commitments. “They allow you to serve and make accommodations for you based on your military duty,” he said.

Black said that anyone looking for a civilian job should have good networking and communication skills. “You can’t be afraid to put yourself out there and let people know your worth,” he said.

In addition, servicemembers should ensure that what they do in the military can be translated to the civilian workplace. “Make sure the job that you currently have transfers into civilian world,” he said. “Make yourself marketable.”

Black believes that job seekers should not be afraid to show they can improve – even when they are applying for jobs. “Make yourself very competitive, and have a good resume that highlights your strengths and weaknesses,” he said, “because your flaws are what gives you your potential for growth.”
As for working at Patterson-UTI Drilling Company, Black said to start strong. “Apply and come ready to work and set yourself apart from your peers.”

Sergeant Camilla Gore Hull knew that joining the United States Army would prepare her for a...

Associations of energy companies are great sources of information about the energy industry and...

Energize Your Job Search - High-Paying, Secure Jobs Are Available in the Energy Industry

The recent drop in oil and gas prices has slowed the growth of much of the energy industry, but...