From the Front Lines to the Power Lines 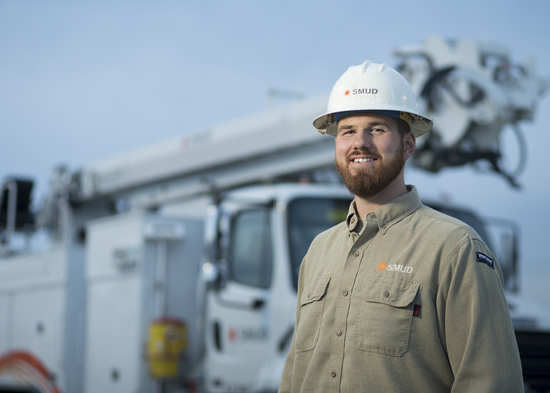 Now, he is an apprentice lineman, Step 5, for the Sacramento Municipal Utility District. Known locally as SMUD, the utility delivers power to about 1.4 million people in and around California’s capital city.

In Iraq, Vollman spent about 7 months operating a detainee holding area – a jail. A later assignment was to escort local nationals and interpreters. Vollman received an Army commendation medal for his service at the jail and an Army achievement medal for support of operations. He also earned an Iraq service ribbon and an Army service ribbon as well as medals for good conduct, service in the war on terror, and his overseas service.

“I got out of active duty in 2009, just after the economy crashed,” he said. “I had never considered utility line work as a career.” He has been climbing poles and restoring power outages for SMUD for almost 4 years.

SMUD recognized years ago that veterans bring an attitude of teamwork and toughness to a job that demands it. “Most of the recruits are interested in field careers like utility line work because it is outdoors and requires close teamwork,” said Susan Wheeler, work force planning and education outreach strategist at SMUD. “The value veterans bring is hardly limited to outdoor work, though. Many bring technical knowhow from their military experience that fits well into many office-oriented careers, too.”

For newly separated veterans, the unemployment rate in California is close to 20 percent. To expand, refine, and formalize opportunity outreach to veterans, SMUD formed a partnership with the Sacramento Employment and Training Agency (SETA), Pacific Gas and Electric Company, Roseville Electric, and American River College (ARC) to offer a Sacramento-based version of PowerPathway. The focus of PowerPathway is to provide opportunities in the utility industry for veterans; it also focuses on disadvantaged youth and women.

Through PowerPathway, Vollman learned about the career opportunity that would change his life. “A friend of mine who knew of SMUD told me I should look into being a lineman,” he said. “No positions were open, but I found the PowerPathway program in Sacramento, and I enrolled as soon as possible. It was an awesome opportunity to meet people from the industry as well as build skills in how to get a job. I complemented that training with construction and green technology courses until my opportunity to try out arrived.”

Veterans who complete the program will qualify for a variety of jobs in the electric utility field. “They’re going to be ahead of someone just coming in off the street,” said SMUD Substation Electrician Bob Martin, one of the instructors. “One reason we like the vets is they’ve already gone through hard training, they’re motivated, and they know how to follow instructions. Because of their experience in the military, veterans also understand that safety and teamwork are paramount.”

Vollman agrees. “The first thing the military does is break you down individually, then builds you back up as a team member. This brings out the potential that was always there. You gain invaluable experience working with a team and taking on leadership roles. Furthermore, my job as a mechanic gave me extensive experience with tools, rigging, and problem solving.”

Vollman is considered a “hot” apprentice, which means a lot of his work is done while the line is still energized. He does hot work on both overhead and underground equipment. This work is similar to what is done by more seasoned journey linemen – and, because he is still an apprentice, work that is conducted with journeyman supervision.

“Many of the challenges one faces in the military teach you about how far you can go,” he said. “For example, rappelling helps to teach rigging and overcoming a fear of heights. I use this daily while ascending, descending, or working on poles.” Josh has also flown in helicopters to get training doing long lining work – maintenance and repair work on high-elevation and high voltage transmission lines. It is breathtaking to behold line workers safely dangling from a chopper while doing the work. “I loved it instantly,” said Vollman.

In November 2015, SMUD unveiled a new regional learning center, the SMUD Power Academy. The center, which will open in early 2016, will support the development of a skilled labor force for SMUD and other utilities across the West. SMUD will coordinate learning opportunities through local colleges.

The Academy’s apprenticeship standards have earned the approval of the California Department of Industrial Relations (DIR). SMUD is the first large-scale Northern California utility to partner with the Division of Apprenticeship Standards, a part of the DIR. Formal accreditation as an apprentice line worker can open up huge career opportunities at any utility in the country.

“PowerPathway is covered under the GI Bill,” said Vollman. “Real career-type jobs are hard to come by. Learning a trade is super valuable, hard to export, and what’s more, they train you on the job. If anyone likes working in the field and overcoming challenges, I would absolutely point them in the direction I took.”

Interested in an Energy or Utilities job? Use our job board to find one!