"Know What You Want to Do, and Go After It" 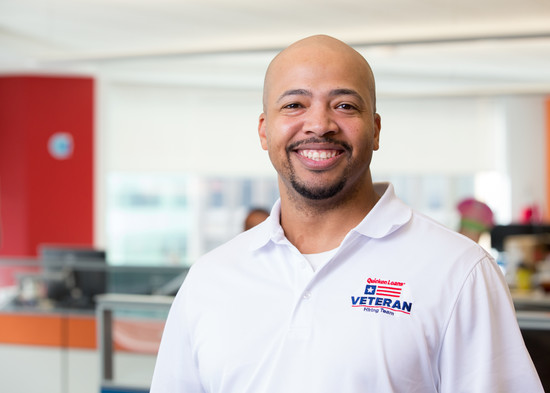 Quicken Loans Inc. is the largest online lender in the United States, according to National Mortgage News, and the second largest full-service residential mortgage lenders in the country. The company closes loans in all 50 states.

For six years in a row, J.D. Power has ranked Quicken Loans highest in the nation in customer satisfaction for primary mortgage origination. The company has been on the Computerworld’s “Best Places to Work in IT” list for 10 years, and on Fortune’s list of “100 Best Companies to Work For” in the past 12 years.

Quicken Loans is headquartered in Detroit, with additional locations in Cleveland, Charlotte, and Phoenix. The company employs about 15,000 team members, most of them in Detroit. Their biggest employment needs are in mortgage banking, technology, and mortgage operations.

The company has a mission to create career opportunities for servicemembers, veterans, and their families. It has found that its hundreds of veteran team members provide such qualities such as hard work, dedication, and teamwork.

Quicken Loans has established a Tour of Duty program, which is an employment program for veterans transitioning from active-duty service. Participants work at full-time positions with hands-on experience, but are initially given a six-month ‘tour’ at the company, with the opportunity to explore multiple areas of the business during their time. If they like it the work, they can request to be hired on full-time. If they do not, they can walk away.

Anthony B. Cortright, Sr., served in the United States Army for 21 years, retiring as a sergeant first class. His main responsibilities were as a telecommunications operations chief. He is now a veteran/college recruiter at Quicken Loans. He started working there in 2015.

When Cortright was getting ready to leave the military, he decided to look for a civilian career with a culture that appreciated veterans. “When I attended the Transition Assistance Program (TAP) class, they said that servicemembers can be categorized in three ways,” he said. “I was in the ‘Wanted a new career’ category.

“When it came to looking for a career, I was very interested in the culture and something that would not be hard for me to transition to and adjust into. My wife helped me find Quicken, and they had a veteran hiring program and a Tour of Duty Program where I could do a six-month program and see if I even liked it there.

“There was a job position that opened up to do recruiting for colleges and veterans, so I saw it as a way to give back and help out. With my 20 years of service, I know how to talk to servicemembers and relate well – and I have kids in college. What better job for me?”

This recruiter urges job seekers to prepare and to do their homework. “I see a lot of resumes and lots of mistakes,” he said. “Make sure numerous people look at your resume, and put information relevant to the job on there. Make time for job searching during the day, and dedicate that time for just that. Research that company and know what they do, and learn the culture. You would hate to get into a job, and then four months later you quit because you don't like how they do business.”

Cortright’s ability to talk to people helped him in the military and at Quicken Loans. “In the military, my job required a lot of customer service and helpdesk functions,” he said. “You had to find a way to talk to people, and transferring that to civilian life was a breeze. Once you learn what you needed to do, it was simply applying it to the job, and off you go to colleges and military bases.”

One of the reasons Cortright enjoys working at Quicken Loans is that they make sure to take care of their veterans on several levels. “We have a veteran initiative where veterans are recognized every month,” he said. “And with a Veteran Committee – that I have the privilege to be a part of – we help servicemembers with the transition process if they are having issues adjusting, and let them also know what’s going on in the community. We still live the teamwork ethic and apply that to the Quicken Loans culture. I have a fantastic team and they have helped my transition by leaps and bounds.”

Cortright encourages veteran job seekers to have confidence. “Believe in yourself,” he said. “I hear so many times that veterans don’t think they can do the job on the outside. Know that you are respected and you can do it. Apply yourself, do the right things, and push forward in the foxhole.”

All veterans have a place at Quicken Loans, according to Cortright. “If you are looking for a change in careers, and a job that that will challenge you, Quicken Loans is the place you want to be,” he said. “It’s financial services, with many different positions inside of that such as banking, mortgage operations, information technology, human resources, and marketing, to name a few. Know what you want to do, and go after it.”

Interested in a job in Financial Services? Use our job board to find one!