From Public Affairs to IT 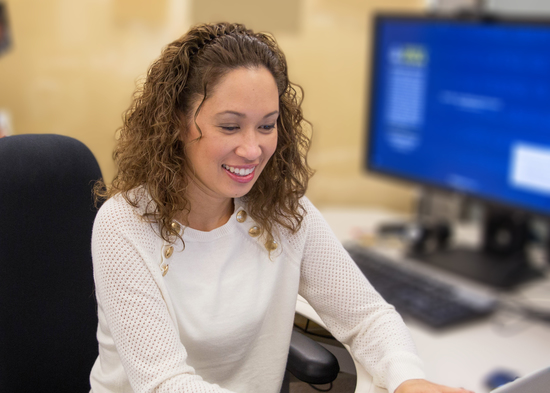 The USAA family of companies provides insurance, banking, investments, retirement products, and advice to 11.2 million current and former members of the United States military and their families. USAA membership is open to all who are serving or have received a discharge type of Honorable – and their eligible family members.

At USAA, the company signature line is “we know what it means to serve.” USAA understands, respects, and honors the men and women in our nation’s military and their families who support them, and is committed to making sure that at least 30 percent of new hires come from the military community. USAA takes a holistic approach to hiring veterans and military spouses, with programs focused on recruiting, transition assistance, skills development, and retention:

Elizabeth D’Angelo spent four years in the United States Air Force before separating as a captain. At Ellsworth Air Force Base in South Dakota and Randolph Air Force Base in Texas, she developed plans and operational procedures for internal and public communication of Air Force news and objectives. She also served as an advisor for the base commander - and was responsible for building relationships with local communities and educating them about the base’s mission.

D’Angelo is now a software developer and integrator at USAA. She provides functional and technical guidance on IT solutions and enterprise systems software, with a focus on member service applications.

After completing the VetFIT™ internship, D’Angelo joined USAA full-time in late 2014. During her first year, she worked on front-end application. Since then, she has deepened her knowledge of Java, and has progressed to back-end development. D’Angelo is also a core member of USAA VETNet Spouse and participates in Aspire, a group dedicated to encouraging and supporting women in IT.

“My skill set is in demand,” she said. “All the positive clichés I used to hear now apply to me. Still, it wasn’t easy to get to this point. After high school, college caught me by surprise. I tried to do it all, but couldn’t keep up, and I lost my scholarship after the first semester.

“While walking around campus, I passed by an Air Force recruiter. I knew they had ROTC scholarships. I signed up and finished my degree at the University of New Mexico. After graduation, I served in the Air Force for four years. However, finding a job after my time in the Air Force was a struggle. By then I was a military spouse, and that often comes with a stigma.”

Success started to come when D’Angelo considered other options. “After being unemployed for six months, I questioned whether public affairs was the right long-term career choice for me,” she said. “And I decided to set out on a different path.

“I don’t want to mislead veterans about how easy it is to switch careers. It’s not. It takes bravery, focus and tenacity. However, success is rarely the product of our own volition. The military taught me determination and to never take short cuts, so I decided to use the GI Bill to get my MBA.

“For the first time, I started looking for jobs that were not in public affairs. Systems development intrigued me, so I gradually pivoted my career toward technical writing. I accepted job roles to learn more, eventually joining a training program to become an IT analyst. I came into my current role at USAA after spotting an ad for VetFIT™.”

D’Angelo has advice for veterans, especially women. “Pursue technology – the possibilities are endless,” she said. “A career in technology can open endless opportunities, and anyone can succeed in this industry. Believe in yourself. Through the VetFIT™ program, I found I was able to quickly learn Java. Not only was I succeeding at something I previously thought impossible, but I was learning a semester’s worth of Java every week for 12 weeks; a remarkable feat that speaks to veterans’ high learning agility.”

She also encourages veterans not to get lost in the crowd. “Don’t be afraid of standing out,” D’Angelo said. “Both of the career paths I’ve pursued – the military and IT – are male-dominated fields. If you have an opinion, voice it. Women can thrive in IT – and USAA and many others have been recognized for their efforts to support women in technology careers.

“Also, focus on the mission. The military taught me to be mission-minded. Today, I work for an organization whose mission is to facilitate the financial security of the men and women of the military and their families. Even through an internal-facing role like mine, I’m still able to live out that mission. Every line of code I write, I know somehow, some way, is influencing the lives of our members.”