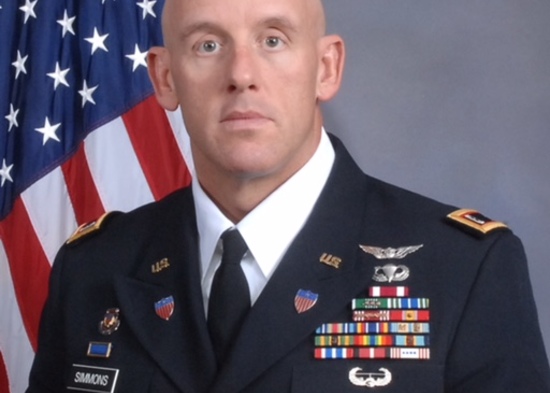 “On the night of my high school graduation, I walked off the graduation field and into my recruiter’s car,” said Jeff Simmons, a 30-year veteran of the United States Army. “I wanted out of my small town.”

He headed to Knoxville, Tennessee, where he selected his job and MOS, and officially became a soldier the next day. Originally from LaFayette, Georgia, near Chattanooga, Tennessee, Simmons had joined the Army’s Delayed Entry Program at age 16. Today, he serves as veterans relations specialist, talent acquisition, for McKesson Corporation, a “Fortune 11” firm. McKesson is a healthcare services company headquartered in San Francisco.

Simmons began attending DAV / RecruitMilitary All Veteran Job Fairs in 2014, and quickly experienced strong success hiring salaried and management personnel. He enjoys his role recruiting veterans because “I’ve been there,” he said. “I was that arrogant football player in high school, and you couldn’t tell me anything,” he recalled. “The military will make you or break you. If it makes you, you will reap unlimited rewards. It taught me the ‘Team Before Me’ concept.”

Simmons believes that attending RecruitMilitary career fairs has delivered a strong return on McKesson’s investment. He estimates he has hired 15+ candidates so far, and he plans to attend more events. He hires candidates from all types of backgrounds, and has found RecruitMilitary events to be a great source for outstanding talent. “We don’t usually make offers at events because we do extensive background checks,” he said, “but it really helps if I can bring a hiring manager to career fairs so they can meet candidates in person instead of just reviewing a resume.”

During his years of service, Simmons wore many hats, serving as a crew chief, helicopter mechanic, drill instructor, military policeman, Blackhawk helicopter crew chief, recruiter, recruiting commander, and warrant officer. In 1995, he joined the Army Reserve, and later moved home to Georgia where he served full-time with the Georgia National Guard.

Working in counterintelligence and interrogation through six deployments to Kuwait, Iraq, and Afghanistan, Simmons got a firsthand view of events that captured our nation’s attention. He served in Saudi Arabia during Saddam Hussein’s apprehension and remembers the loud cheering everywhere when his capture was announced.
Simmons successfully recruited for the National Guard, and led the nation in recruiting for six years. His secret to success was personal contact and accessibility. “I’d give out my cell phone number and encourage high school kids or their families to call me if they had questions,” he said. “They were always surprised that I actually picked up or called them back.”

When it came time for Simmons to retire from the military, he researched companies that had a good reputation for hiring veterans. He had been to RecruitMilitary events before, and had networked at them. One recruiter told him, “I don’t have anything right now, but I’m going to give your resume to a friend of mine,” he said.

That friend was Robert Weyer, the talent development manager at McKesson. About 96 hours later, Simmons had an offer to come to McKesson and begin working as a contract employee. “That was a leap of faith,” he acknowledges, but one that proved worthwhile. Simmons hit the ground running and outperformed expectations, becoming a full-time employee on September 14, 2015.

One of Simmons’ favorite hires is Peter Dalstrom, a veteran who transferred from Hawaii to Colorado. A McKesson hiring manager had interviewed Dalstrom at a RecruitMilitary job fair in Denver. “Two hours later, the manager came out of the interview and said, ‘I got my guy. I don’t need to look anymore.’”

Dalstrom interviewed once more, and was hired on the spot. He began as a night shift operations supervisor, and now leads a team of 12 to 14 people. “He’s a rock star,” said Simmons. And Simmons’ favorite part? “Every now and then I’ll get a text from him saying things like ‘Dude, I’m loving my job. Thank you.’ That makes it all worthwhile.”

What can employers do better to appeal to veterans? Here is some advice from Simmons:

What can Veterans do better to appeal to employers?

But he acknowledges that there are exceptions. “For example, some guys come up to me and apologize for being poorly dressed. Then they explain that they are on their lunch hour at work. That actually gives them bonus points in my mind, because it demonstrates that they have situational awareness.”

In addition to finding and hiring veterans for McKesson, Simmons is putting his GI Bill benefits toward a bachelor’s degree in applied management from Grand Canyon University. His military experience and training have earned him plenty of graduate-level course credit, which will allow him to earn an MBA in about 14 months, along with Project Management Professional (PMP) and Six Sigma certification once his undergraduate coursework is completed.

Simmons suffers from PTSD – and has been very open about his battle and the tools he has used to combat the disorder. “I’m asked all the time by other vets: ‘Can I get hired with PTSD?’ and the answer is absolutely ‘Yes’,” he said. McKesson provides professional development and networking for its veteran employees through the McKesson Military Resource Group (MMRG). This coalition delivers networking and mentoring support to employee veterans across the company, and also provides key input to McKesson business leaders on issues important to veterans. McKesson additionally sponsors and participates in a variety of events for the veteran community.