From The Army to Success at Genesee & Wyoming 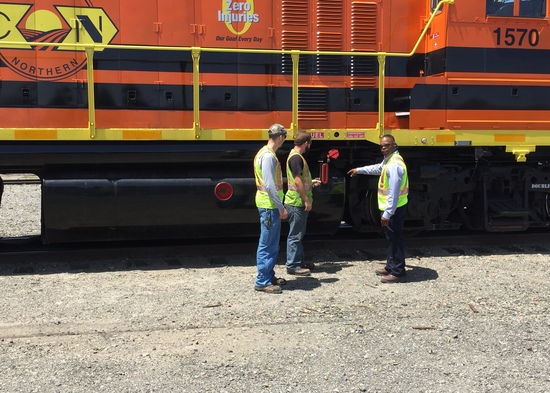 The company’s railroads have 281 self-identified veterans as employees, 29 percent them in supervisory or other leadership roles. G&W actively recruits veterans through job boards and job fairs. In addition, G&W has an active member on the American Short Line and Regional Railroad Association (ASLRRA) Veterans Recruitment Committee. This group supports and informs exiting military personnel about career opportunities in the short line railroad industry, and provides it members with tools and information they can use to recruit and hire veterans.

G&W has found that veterans possess skills, competencies, and work experience that transfers well to rail operations. Veterans are used to working in teams, have solid leadership skills and a strong work ethic, are reliable, and are used to working safely in outdoor environments and/or around heavy equipment. Each of the company’s railroads offers a family-friendly, small-company environment focused on safety and teamwork.

Kirk Bedford spent five years in the United States Army before separating as a sergeant. His railroad career began in January 1995, the month after he finished his military service. Now, he is general manager of the California Northern Railroad Company, headquartered in Davis. He oversees the execution of the railroad’s operations plan, which includes short- and long-term planning, assessment of new business opportunities, and customer service.

“Each day brings something different,” Bedford said. “You’re not stuck doing something repetitively day in and day out. It certainly keeps your mind fresh.”

He admits that it took him a while to get out of military mode after leaving the Army, but also acknowledges that his years in the military contributed heavily to his success at G&W. “One of the more important skills you learn in the military is attention to detail,” he said. “That same skill is crucial in the rail industry, since safety and customer satisfaction both depend on how closely you pay attention to every aspect of the operation. I’ve seen first-hand several veterans – men and women, younger and more seasoned – adapt well to the industry.”

Bedford also believes that a railroad career requires a great deal of commitment and discipline, characteristics adopted throughout an often challenging tenure in the military. “Sometimes, you work in 120-degree weather, in heavy rain, or in below-freezing temperatures,” he said. “It takes a lot of discipline to do the job correctly under those conditions so that no one is hurt and customers can continue to rely upon you to deliver their freight. Even on a normal day, you have to stay completely focused on the job at hand. One mental lapse or loss of attention can lead to severe injuries or major damage.”

Safety is Bedford’s primary concern as general manager. In fact, his greatest accomplishment is that no one who has ever worked for him has ever been injured on the job. “G&W railroads do a phenomenal job keeping people safe,” Bedford said. “I’m proud to be a part of an organization that truly focuses on the well-being of employees.”

That sense of care for employees creates a family atmosphere at the California Northern and the rest of G&W’s railroads, according to Bedford. “Just a month ago, I sat and chatted with G&W’s CEO about children and grandchildren,” he said. “It was very much like the camaraderie felt when I was a soldier in a division, battalion, or unit.”

What does he recommend to veterans coming home and looking for a civilian job? Look for a position that is dynamic and stimulating. He also encourages veterans to look for jobs that match their Military Occupational Specialties – to make the transition to civilian work easier. Finally, Bedford urges networking, especially with other veterans who may be able to recommend a job that will be a good fit.