A Good Home At Con-Way 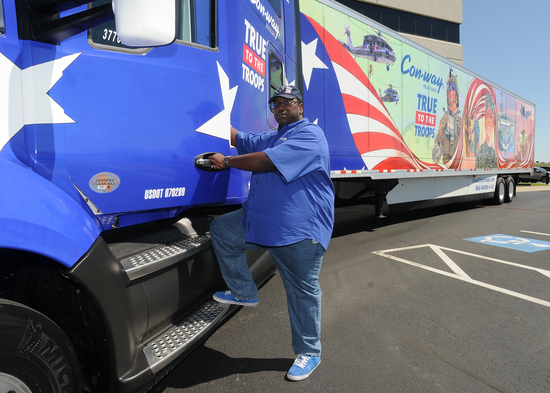 Con-way Truckload driver Darrell Bogan did not expect to be selected for the honor of driving one of two new True to the Troops tractor-trailers during the month of May. When he learned that his employer had chosen him, he was thrilled.

“It was such an honor,” said Bogan, a member of the National Guard for nearly seven years. “It’s not like I talk about the military much, but I shared my experiences with a former student, and he nominated me. I was surprised to be chosen, but it’s such an honor to drive this truck.”

Bogan and Tomy Fox, the other veteran chosen, drove the trucks during May, which was Military Appreciation Month. At a ceremony in Joplin, Missouri, that month, Con-way showed off the two tractor-trailers wrapped with graphics designed to honor the United States military and its members. Joplin Mayor Michael Seibert proclaimed May 1 “Con-way Truckload True to the Troops Day.”

“I was in the National Guard for more than six years, from February 1984 to 1990,” Bogan said. He left as a specialist. “I was trained in combat communication and tactical wiring. I joined the military because where I lived at the time there were no jobs. So military was the answer for me.”

He is thankful for what the military taught him. “It made me a better person,” Bogan said. “I became more disciplined. It helped develop my personality. Driving a truck can be challenging, but what I learned in the military helped me be ready for it. I’m better with people and can stay calm under pressure.”

Bogan believes that veterans like himself will find a good home at Con-way Truckload. “I've been a driver for Con-way Truckload for almost seven years and loving it,” he said. “Con-way is the only truck-driving job I ever had. Previous jobs I had were dead-end jobs. I talk to a lot of truck drivers, and they like what I have to say about Con-way. I always try to talk veterans into driving with us.”

Bogan said that even those veterans who never thought about driving a truck will find it to be a rewarding career. “They should give it a try,” he said. “They will be surprised. I’m proud to drive for this company because they support the military and they support me. I think Con-way is a great company to work for. They treat me better than I could have imagined.”

Whether it is at Con-way Truckload or elsewhere, Bogan has some simple advice for veterans. “Be happy,” he said. “Take your time, and find that perfect job that works for you and your family. That could be at Con-way. They truly appreciate the military.”