Con-Way Truckload: True To The Troops 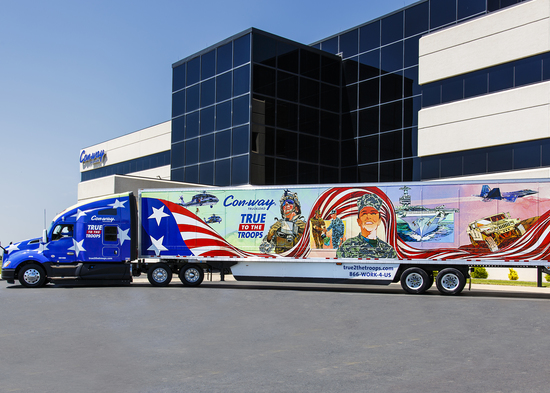 Con-way Truckload, a subsidiary of Con-way Inc., provides time-definite, dry-van, full-truckload transportation services throughout the United States – with extensive coverage of Mexico and service for Canada. Con-way Inc. is a $5.8 billion diversified freight transportation and global logistics company based in Ann Arbor, Michigan.

Con-way Truckload has 3,350 employees. Of those, 2,900 are company drivers and dedicated owner-operators piloting a fleet of 2,900 tractors and 8,000 trailers. Con-way Truckload provides solo, team, and dedicated trucking operations. With a workplace culture built on respect for employees and recognition of their professional skill and expertise as keys to success, Con-way Truckload strives to deliver value-added services that help Fortune 500 businesses achieve supply chain goals.

Bert Johnson is vice president of human resources at Con-way Truckload, responsible for human resources, recruitment, safety, and communications. “Overall, I am tasked with balancing the need to recruit talent, making sure that we are compliant to all government regulations, and ensuring we have the safest driving fleet on the road today,” he said.

The company has open positions in many areas, but what it needs most is to put men and women behind the wheels of its trucks. “As with many organizations,” said Johnson, “we have a variety of career opportunities at Con-way Truckload, from skilled to unskilled positions and exempt to nonexempt within a wide range of departments – finance, HR, safety, operations, sales, etc. Our company’s greatest need is attracting safe and qualified professional over-the-road drivers.”

The company supports veterans and is interested in hiring many more. “Con-way Truckload has always been committed to supporting servicemembers through employment opportunities; and we feel it is our duty, as a company and as citizens, to provide for our veteran employees and their families while these citizen-soldiers are on active military deployment,” he said. “Currently, 16 percent of Con-way Truckload’s total employees are military veterans.”

Con-Way Truckload does a lot to support its employees who have military backgrounds. “We have a variety of programs and policies to support veteran employees, including a guaranteed job when the employee returns from deployment,” said Johnson. “Also, a pay differential, meaning while a driver is deployed, Con-way Truckload will pay the difference between military pay and what a driver was previously making.”

The company also has an apprenticeship program for veterans who would like to start a career in trucking. The program allows veterans to use their GI Bill benefits to supplement their income during the first year of employment. During that year, new drivers must reach a series of skills-qualification, training, and safe-driving performance milestones as a condition of continued employment.

Con-way Truckload also works directly with the United States Army to recruit employees through a program called Army PaYS. This is a partnership between the Army and the U.S. business community to help the Army attract, train, and deploy talented people who want to serve their country and secure future success once their Army service is complete.

“We have relationships with the Transition Assistance Program and One-Stop Career Centers throughout the country, to help recently separated military personnel find the right job, program, or opportunity to start or continue their training,” said Johnson. “We also regularly support military-focused non-profits, including Wreaths Across America, Holy Joes Cafe, and others.”

Johnson believes that the core values of the military align with those of Con-way Truckload. “We see a high level of discipline, commitment, and work ethic from our veteran employees,” he said. “They are mission-oriented, and most have the mindset of ‘100 percent mission success,’ an attitude that we share when providing safe and excellent service to our customers.”

Johnson also believes that the company should support those who put their lives on the line for their country. “We strongly feel that providing our servicemembers with employment opportunities and training is just the right thing to do,” he said. “They put their lives at stake to protect and serve our country, and Con-way Truckload believes that it is our responsibility to support them.”

Veterans are able to utilize what they learned in the military at Con-way Truckload. “Skills gained during military service are transferable and complementary for a career in truck driving,” said Johnson. “Our military employees are already used to documenting their work, regularly checking in, working odd hours, and being meticulous about safety.”

Making the transition from the military to Con-way Truckload should be fairly easy, given the servicemember’s background and the company’s culture. “There are also many work and lifestyle similarities that make the transition from active military to a career with Con-way Truckload a smooth one,” said Johnson. “Culturally, the values learned in the military are very similar to Con-way Truckload’s core values. Operationally, we are highly structured and organized, and teamwork is critical. Most importantly, safety and excellence are our highest priorities. We’ve found that all of these aspects match up well with the skills and training of our military employees, giving them the greatest opportunity for a successful and rewarding career.”