Job Fair Special Report: Why Do The "Regulars" Keep Coming Back? 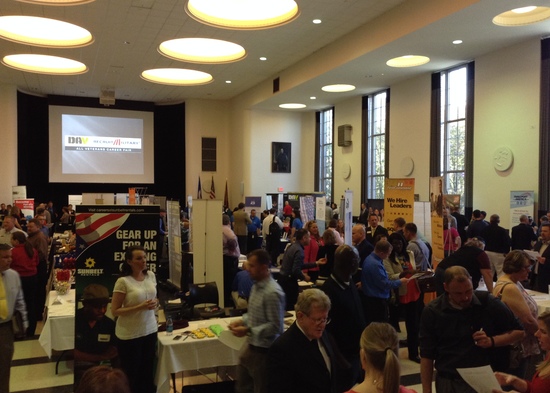 RecruitMilitary has been producing veteran job fairs since 2006. By now, many companies have established themselves as “regulars,” exhibiting at several events every year, year after year. Why do the regulars keep returning? How have our events helped them? To find out, I went to our DAV/RecruitMilitary All Veterans Job Fair in Cincinnati on May 28, 2015, and spoke with recruiters for several of the regulars. I put my mobile phone on “record,” and assaulted the recruiters with a battery of questions:

My first stop was The Home Depot booth, where I met Michael Morgenthal, Nick Bellmyer, AJ Crank, Kelly Broyles, Brad Stidham, David Slack, and Scott Brown. The recruiters were working in front of their table, engaging with candidates as they walked by.

The Home Depot has been attending our events since 2007. The company hires veterans for all positions – in-store, corporate, and distribution – and offers everything from entry-level to salaried positions. The Home Depot has found that veterans do especially well in distribution and supply, because many of them are trained on driving heavy-equipment vehicles and are knowledgeable in logistics. In fact, one of the recruiters on the team – a veteran himself – works in the distribution and supply department. He was looking to fill 40 positions in his department alone.

The Home Depot recruiters told me that their company specifically hires veterans because of a shared set of values. At our job fairs, the recruiters find employees who already live and practice such values as dedication, integrity, and respect for others. In addition, both the military and The Home Depot believe in growth from within. Plus, one recruiter added, veterans always have the best stories!

What advice would the recruiters like to offer our readers? They had advice for both veterans and employers. For veterans, they suggested getting in with a strong company. “Let your performance speak for you,” they said. “Be willing to take steps back [to get further training or education] in order to take steps forward.” And “cast a wide net because, in this market, you never know where you’ll find your perfect job.”

The recruiters suggested that employers “take the chance. The veteran might not interview well since that isn’t a skill they’ve been repeatedly trained on [unlike civilians].” Also, hire veterans whenever possible because veterans tend to work hard, and they tend to be dedicated to getting the job done – and done right.

Next, I stopped by the Mercy Health table, where I spoke to Doreen Owen, Nadine Reynolds, Sarah Carroll, and Samantha Wright. Their company has been attending RecruitMilitary Job Fairs since 2012. Mercy Health keeps coming back because job candidates hired at our events are exceptional employees. The recruiters also said that attending our job fairs is a great way to network; they meet a lot of capable, desirable job seekers. And sometimes candidates pass along their job-posting information to people they know – people who might be a perfect fit for the job.

And finally, according to Mercy Health, attending our job fairs is simply a great way to raise the company’s visibility in the veteran work force community.

Mercy Health was hoping to find emergency medical technicians (EMT’s) and paramedics at this particular job fair. The recruiters told me that veterans do especially well in such positions because of their discipline and their ability to keep calm under pressure.

The company often has openings in corporate and IT as well. Over the years, Mercy Health has found that IT jobs tend to be the most popular with veterans, though the company hires for positions across the board. Mercy Health believes in hiring veterans so much that, for certain positions, they offer bonus pay for related military experience.

The recruiters’ advice for our veteran readers:

They recommend that employers who want to hire veterans “get out there” and get involved in the community.

Next up was DeVry University, which has been attending our events since 2006. Ariel Dejesus, who was staffing the booth, has been to quite a few of those events recently. In fact, he got his own job by coming to one of our fairs.

In 2010, he had just retired from the United States Marine Corps and had no idea where to start with the civilian job force. He attended his first RecruitMilitary Job Fair shortly after transitioning out and ended up speaking with a DeVry recruiter. It did not take long for him to realize that most employers were looking for candidates with degrees, and so he enrolled for classes at DeVry. After he graduated in 2011, DeVry offered him a position as a military education liaison. He worked at that job for more than two years. A little over a year ago, DeVry offered him the position of manager of military affairs.

I asked Dejesus about his objective in coming to the Cincinnati job fair. Obviously, he has had wonderful personal success with these events. But I wanted to know what, exactly, brings him back each time. He told me that he loves working with veterans because he is one. He understands what veterans are feeling when they transition out of the military. He remembers his own uncertainty and the way everything seemed overwhelming. But our job fair helped him, and he wants to help others. He wants to give back.

To Dejesus, a successful event is not measured by how many candidates enroll in classes at DeVry. Rather, a successful event is one at which he can simply talk with people. He enjoys meeting people and explaining to them how they can become more competitive in the job market. When I asked him what advice he had for readers of Search and Employ®, he recommended that recruiters bring veteran employees of their own companies to the events. The veterans’ presence proves to job seekers that veterans can find success in their companies, and the veteran-employees can act as liaison officers and military-experience translators to connect veteran job seekers with civilian employers.

Next, I talked with Matt Feldhaus, Nate Skeen, Rich Casillo, and Melissa Donk at the Apple booth. The company has been coming to our job fairs since 2011.

The Apple booth was uncluttered, yet lively. On the table was a lineup of iPads that veterans were using to set up their application profiles online.

When I asked the recruiters about their objective at the job fair, they said that it was relatively simple: Apple wanted to use the event to reach out into the veteran community. Obviously, hiring veterans to work for their company was a major objective. But they were very interested in just building a deeper relationship with veterans in general.

I was pleased to find that almost all of the representatives working the Apple booth were veterans. They told me that veterans have a future at Apple. They like to hire veterans because of their ability to work in teams and their strong people skills.

The recruiters pointed out that a candidate does not need a tech background to succeed at Apple; technical skills can be taught. Apple is looking for people with confidence and a willingness to be themselves. “We have a whole range of personalities at our company,” the recruiters told me, “and there is a range of positions to fit those different personalities and skills.”

They reminded me that, when people walk into an Apple store and see all of the employees wearing the same kind of shirt and seeming to perform essentially the same role, there is a lot more going on. Even in the stores, there are many different roles for employees.

To enhance its relationship with veterans, Apple is initiating a program to give back to the community and help veterans and military families. As project manager, Feldhaus will utilize his military experience and knowledge to train his colleagues to better understand some of the terminology, nuances, and culture of the military. In addition, he will help coordinate logistics in hosting events with other departments within Apple, and talk to various representatives within Apple's many departments to get a better understanding of the diverse jobs available within the company.

When I asked the recruiters for advice for our readers, they said that many companies, theirs included, are looking for motivated individuals. They are looking for people who are willing to “go out and enrich people’s lives.”

My final stop was the booth of AdvancePierre, which has been attending our All Veterans Job Fairs since 2013 – and was the corporate sponsor of the Cincinnati event. AdvancePierre keeps coming back because the company loves having the chance to connect and network with veterans.

When AdvancePierre has jobs available, the company wants to hire veterans for them; it’s the company’s way of saying “thank you” to servicemembers.

I spoke with Jennifer Jody and Shirley Schoedel about their reasons for attending our events. AdvancePierre’s objective is to raise visibility among veteran job seekers. While they do bring a list of available jobs, they are present not merely to fill these positions.

In fact, if someone approaches the table who might not feel like a good fit for AdvancePierre, no one’s time is wasted because a connection is made. The recruiters help all candidates who stop by their booth by telling them what kinds of questions will be asked when it comes to interviewing for the civilian work force. Knowing what to expect can help a veteran know how to word a resume and more seamlessly explain his or her relevant military experience.

Another reason for talking with everybody: Sometimes, the perfect position for a candidate will not open up until weeks after an initial contact.

In addition, AdvancePierre also likes to get a feel for the kinds of positions people are looking for. Our job fairs give them this opportunity.

An event is also successful, of course, if the company finds good candidates. The recruiters have found that a lot of candidates at our events know what they want to do, are qualified, and are ready to start right away. The recruiters were happy to tell me that they had already conducted two on-site screenings at the Cincinnati event.

While AdvancePierre tends to find many veterans interested in IT positions, the company understands that job skills can vary quite a bit. For example, at this particular job fair, a large number of financial analysts stopped by their booth.

After speaking with the exhibitors and considering their answers, I came to these conclusions: