A Strong Foundation and the Tools to Grow 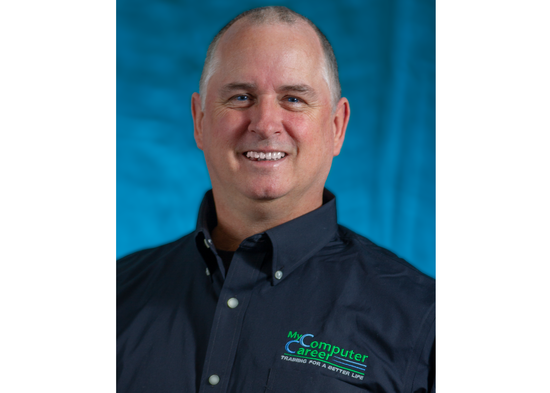 We all have those "best laid plans" – the ones where we finally had a goal and knew all the steps we’d need to take to get there. For once, we had something to say when someone asked, “What are you going to do?” But then, something happened to change everything.

“I started planning my civilian career well before retiring [from the U.S. Air Force],” said U.S.A.F. Master Sergeant, Sean Giberson. “I was going to move with my family to North Carolina, go to school, and become a pharmacist.”

Giberson’s goal, to become a pharmacist, was not one he just happened upon one day. He’d researched schools and programs and he knew the different types of jobs and salaries that would open up to him if he was willing to put in the work. In fact, he even completed an online pharmacy technician program before separating from the military.

Fast forward four years: Giberson was well on his way towards his goal, knocking out prerequisites at a community college and working as a pharmacy tech to gain experience. “It was a difficult time. As a family, we were struggling,” Giberson said. He began to realize that if they were to thrive, something needed to shift.

“Instead of going on to pharmacy school, I got a bachelor’s degree in paralegal studies.” But after 19 months of looking for a job as a paralegal, he still wasn’t finding work. “Even if you get the degree, there are some careers that require more on top of that. I was missing certifications, but I was too burnt out to continue school to get them. I was ready to work.”

When a friend offered an opportunity to work physical security at a nuclear power plant, Giberson didn’t hesitate. “It was a great job, but 11 months into my career as a nuclear security officer, I was laid off.”

This time, Giberson didn’t have any job offers waiting for him. There was no backup plan, there had been no time to plan at all. He was just suddenly unemployed.

“I had to take a different approach. I went to a RecruitMilitary career fair, where all the employers are looking to hire veterans or their spouses. I talked to recruiters at a few different booths and made some good contacts, but the one that stood out was actually a school: MyComputerCareer. Their program was short and provides essential certifications to work in IT (information technology.) I decided to sign up.”

Giberson learned, studied, and tested for the next 42 weeks. He started a study group with a couple of his peers, and before long, the small group turned into a good portion of their class, studying together in the campus common areas between classes. He learned more than networking and security during his time at MyComputerCareer. He also learned that he loved to mentor.

He still had about four weeks in the program when he was hired as a help desk technician by a network provider.

“When I had been at that company for about five months, MyComputerCareer called me and asked me to interview for a flex instructor position,” he said. “After landing the position, I came in to do orientation and was asked to conduct a teaching demo for Dan Pryor, the chief operating officer at MyComputerCareer.”

Pryor was so impressed with Giberson, he extended an offer as a primary classroom instructor, which Giberson has done ever since.

Now, as an instructor, he has the opportunity to mentor every day. “I really enjoy teaching because it gives me the chance to show someone their potential. My students are usually unsure about their skills and their knowledge. They don’t want to mess up,” Giberson said. “My job is not only to teach them the knowledge they need for an IT job, but to teach them to be confident in their skills and continually grow their knowledge.”

Instead of a hardline approach, Giberson helps his students succeed by helping them learn skills like time management. “I was a non-traditional student, so I understand what it means to try to go to school while working and supporting a family. School is the last priority for nontraditional students. They just have a different experience,” Giberson said.

Giberson takes the “No Man Left Behind” approach to teaching. “I help my students by breaking down their tasks into manageable portions and even being flexible with deadlines. If they are overwhelmed, they will not be able to comprehend the material.”

In addition to that mindset, Giberson approaches teaching with patience and structure, other skills he honed during military service. “I have begun to recognize certain qualities in my veteran students that make them good candidates for a career in IT,” he said. “Most of the jobs you do in the military can also translate into a facet of the IT industry. For example, I was an electronics maintainer, so that helped me with understanding hardware in the civilian world.”

Desirable skills are sometimes difficult to translate from the military to civilian workforce, but some things need no translation. “Never underestimate the advantage of having a security clearance. I see opportunities every day for veterans who have any type of clearance,” Giberson said.

Ultimately, Giberson wants veterans to remember one thing: “Take the time to know your interests and passions and look for the opportunities that will leverage them.” As Giberson found, even if you have an ironclad plan, life has a way of changing directions.

For those interested in the IT industry, Giberson has advice for them, too: “IT offers so many career paths. I always tell people that the MyComputerCareer Information Technology Security Administrator (ITSA) program will give you that solid foundation, to enter the IT industry with confidence and the tools to grow.”

MyComputerCareer has campuses in the following locations