From the Mouths of Employers: The Value of Hiring a Veteran 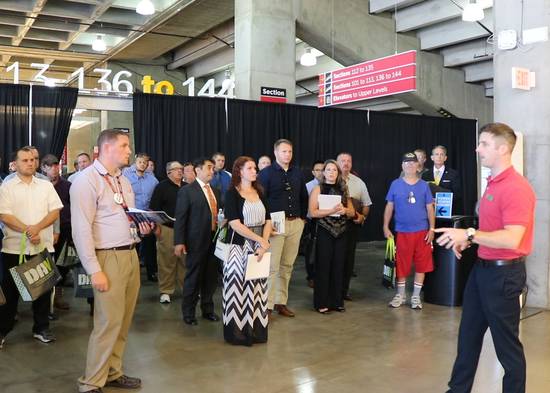 We caught up with several employers at a recent RecruitMiltiary Veteran Career Fair in Atlanta, Georgia, where all were seeking veterans to hire. It’s an event full of talented, military-trained potential employees, and they had lots to say about attending veteran career fairs, as well as the talent they bring.

“What I love about hiring veterans is obviously the skill sets that they bring,” Cannon said. “They’re mission-oriented, they’re success-driven, they have a level of discipline, and they are used to leadership in situations that are ever-changing and dynamic.”

Xavier Cugnon is a former Marine and the Vice President of Human Administration at Arrow Exterminators. “I think veterans are trained to represent themselves well,” he said. “At almost every event we have attended, we have placed a veteran in our organization with some great success,” He pointed out that some of the attributes and learned competencies that veterans bring to the workforce are discipline, appearance, and humility.

“One of the key audiences that we identified as people who could not only be successful with Colonial Life, but who possessed certain skills that are of value to our organization were military veterans,” said Lauren Addy, Director of National Recruiting for Colonial Life Company.

Addy went on to note the networking advantages that come with attending a career fair. “Our recruiters and managers often visit the other booths (at an event). That’s a big advantage and something you don’t always think about. But from a networking perspective, there may be candidates that another company speaks to that aren’t a good fit for them that they can refer to your table,” she said.

Alyssa Desantis is a senior HR Manager, Georgia Market, for Pepsico. “We find that veterans are very transferrable to our organization from an experience standpoint and from a work ethic standpoint,” she noted.

Pepsico has found success in retaining veterans as well. “When we highlight our veterans in our organization, it’s impressive to see the number of individuals who have a background in the military, and they tend to be very successful,” Desantis continued.

It’s true. Veterans work well in teams, respect leadership, and are results-driven. They also bring discipline and dedication to a team.

RecruitMilitary has had more than 35,000 successful job placements in the last 36 months. Go to www.recruitmilitary.com to find one in your area and become one of our success stories!