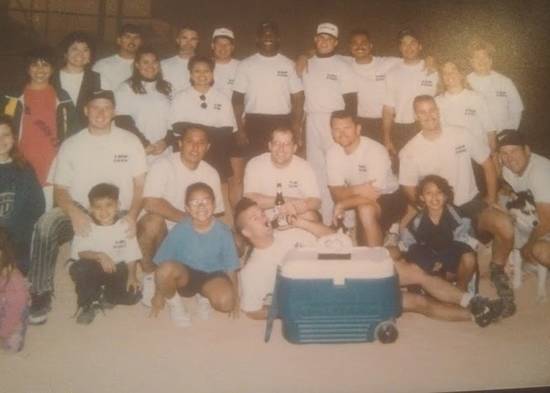 When Chris Stevens and his fellow Air Force veterans gathered to tailgate and attend a recent Cincinnati Bengals – Buffalo Bills game, the last thing they expected was to have their reunion featured on the news. But that’s exactly what happened.

For many veterans, the camaraderie experienced with fellow vets remains the best part of military service. The group came together to celebrate one friend’s return from a tour of duty in Afghanistan, but their history goes back to when they were stationed together in Okinawa, Japan at Kadena Air Base. “We were all softball players, which was a big activity over there. When you’re stationed overseas, the guys you work with tend to become the guys you hang out with after work. We all liked to play, and so we formed our own softball team,” Stevens related.

The rest, as they say, is history. The group remained close over the years as they got out of the service and moved on to civilian careers. They began travelling from all over to attend NFL games together a few years ago, landing mostly in Cincinnati. “It started with three or four guys the first year, and kept growing. This year, we wanted to surprise our friend Bobby (Purtiman), who was coming home from a yearlong tour in Afghanistan. We planned the surprise with his wife, and four days after he arrived home she broke the news to him that he was flying to Cincinnati to see his buddies,” laughed Stevens.

“We were all just laughing and having fun when a film crew for a local news station walked by,” said Stevens. “But when they found out why we were all there together, they covered our story.”

Stevens, who serves as the Director of Enlisted Recruiting at Bradley-Morris, Inc. is a retired Air Force Master Sergeant with 20 years of service. He worked as a crew chief with the Thunderbirds, an elite flying organization within the Air Force, in the 1980’s. He later became a production superintendent managing other aircraft mechanics.

The group’s common bond has kept them close. "When you’re moving around in the military and after you get out, if you can stay in touch with two or three guys, you’re doing pretty well. So, we feel really blessed to have a group of 15-20 guys like ours," said Stevens. He offered a quote given him by an Air Force buddy: “'The crest and crowning of all good, life’s final star, is brotherhood.’ This is what we are in the military, a BROTHERHOOD.”