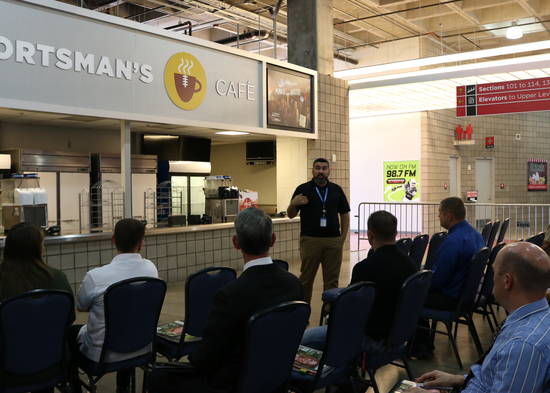 A successful strategic partnership with Goodwill of Central and Northern Arizona and RecruitMilitary proved a boon for veterans seeking employment. That collaboration secured 157 job offers from the employers attending a DAV-RecruitMilitary Veterans Career Fair at the University of Phoenix Stadium. Sixty-six organizations and more than 250 job seekers gathered at the June 2017 hiring event, which was sponsored by Disabled American Veterans (DAV), and JP Morgan Chase.

Chris Newsome is the Director of Partner Relations for RecruitMilitary and is a U.S. Army veteran. “It was a very successful tag-team effort. Goodwill’s U.S. Military Veteran Services team was an immense value-add to everyone,” he said. “Beyond the wonderful resources that Goodwill provided, they also brought career coaches with them to guide attendees and make the career fair as effective as possible. Providing this level of support significantly enhanced the productivity as well as the success rate for the military men and women in attendance.”

Goodwill set up a portable career center which included a computer café of 15 computers with Internet access; printing resources for both candidates and exhibitors; on-site resume writing services; interview and career coaching throughout the day; on-site event liaisons/guides; and volunteers supporting candidate registration. The computer lab proved a boon to job seekers, many of whom used the terminals to apply for positions just prior to walking into the event, enabling them to have more meaningful conversations with recruiters.

Marco Garcia, Goodwill Community Relations Senior Manager, and Jezreel Ramirez, head of Goodwill’s Employer and Community Relations Military Services Team, served as the tip of the spear for the strategic partnership with RecruitMilitary. “Our mission at Goodwill of Central and Northern Arizona is to end unemployment in each state. We partner with the community to find stakeholders. With more than 1,000 employers in our area of operations, we try to create as many pipelines as possible,” said Garcia. “For the last four years, Goodwill of Central Arizona has been ranked #1 in connecting people to jobs: we connected 44,000 in 2016 alone.”

Goodwill of Central and Northern Arizona operate 25 career centers, which serve as multi-faceted resources for job seekers. “We place a lot of emphasis on sending the right candidate for every job that we place,” said Garcia. “We help clarify their goals and expectations. Do they need a resume? Coaching? We work with them to provide work readiness. We also help with other issues that could be impacting their job search. For example, if they are having trouble with their transportation or housing, we also refer them to other organizations that can assist them with those issues.”

When the organization sought to expand its outreach to the veteran community, Jezreel Ramirez, a Marine Corps veteran, was brought in to connect employers, schools, and other organizations with serving vets. Ramirez found RecruitMilitary on LinkedIn, and quickly connected with Newsome to start the dialog to build a partnership and coordinate support. In 2016, Goodwill served 3,600 veterans and placed 1,100 of them in jobs. Both Goodwill and RecruitMilitary serve the same population. What better way to collaborate than to join forces to help veterans gain employment?” said Garcia.

To encourage attendance, each Goodwill career center marketed the event, and placed the link to register on the landing page of its 600+ computers. Goodwill leveraged its influence with its 35,000 Facebook followers to promote the event and create a community buzz around it.

Just before the career fair began, Ramirez conducted a workshop on personal branding and coached attendees on what to expect when they approach an exhibitor’s table. “Employers will Google applicants, so it’s important to have a positive presence on social media, but also by doing positive things in the community. I teach veterans how to use their conversations with exhibitors as an opportunity to establish your personal brand,” he said.

The outcome? “We had great feedback from the event,” said Garcia. “We were able to reach out to numerous veterans who had never received Goodwill of Central and Northern Arizona’s services, as well as gain exposure to other employers in the area. It helped enhance our presence in the community as a resource for veterans, and we hope to build on this for future events,” he said.

“Veterans follow instructions and know structure,” said Ramirez. “But they can also take initiative, and come up with solutions. And they always step up, whether it means after hours or weekends – that’s just their nature. Their integrity and work ethic is beyond compare. I always advise people to pursue excellence, and take on additional duties. I have found that great things happen when you are the type of person who steps up and does something because it’s the right thing to do, and that’s what veterans personify.”

Garcia has witnessed numerous success stories over his career. “I’ve spent 17 years connecting people to jobs, and I love to help someone open the door to employment,” he said. “You always get that chill of excitement when someone lands a job. People come to see me years after being placed in a job, and they have moved into management and leadership roles, and they say, ‘You helped me.’ It’s very rewarding.”

“The relationship continues, and our two organizations are moving forward with enduring efforts to best serve the military community of central and northern Arizona,” said Newsome.