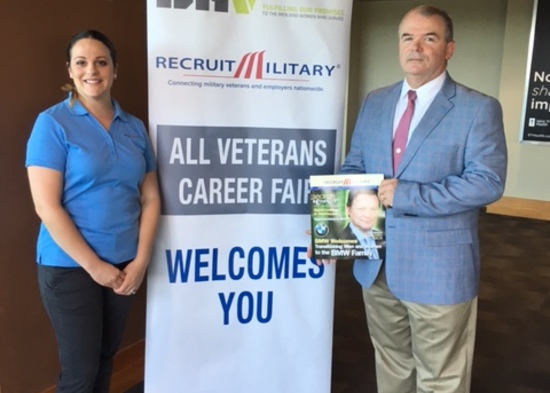 On September 15, I attended the Nashville RecruitMilitary all-veterans career fair at Nissan Stadium. While there, I had the chance to interview the deputy commissioner of the Tennessee Department of Veterans Services, Mark Breece, who had been invited to address the veterans in attendance before the event kicked off.

Since Breece is a veteran himself, I wanted to know his story. I wanted to know about his military experience and how he uses his current position to serve the veterans of Tennessee. He was kind enough to sit down and chat with me.

Breece enlisted as a private in the Army National Guard in 1978. He served for 33 years, retiring in 2011 as a command sergeant major, responsible for the training, health, and welfare of over 16,000 Army and Air National Guard members. During his service, he spent time in Iraq, Afghanistan, Bosnia, Panama, and Bahrain. His Military Occupational Specialties (MOS’s) included military police and logistics.

He told me that one rewarding feature of the military is that it enables servicemembers to connect with other cultures. “In 33 years, I gained a lot of experiences,” he said, “but probably the most rewarding and exciting thing I was able to do was to learn the various cultures in the different countries I visited. Learning how people in different countries live, work, and survive is so eye-opening. Some have it tough. It makes me grateful and proud to be in one of the strongest nations in the world.”

Breece had two deployments, and he also traveled frequently to Afghanistan and Iraq to check on his troops when they were deployed. “In the National Guard, you have two chains of command,” he explained. “As a guardsman, you work for the governor of the state. But when you go active duty and mobilize, you work for the president of the United States.

“So in a case like my visits, where I am under the governor’s authority, I may not have a lot of control over the troops’ circumstances, but I am able to act as a spokesperson for them. I also used these visits as an opportunity to provide moral support and encouragement. I wanted to remind the troops that what they were doing was important and that they were supported and appreciated.”

Breece has lived in Tennessee since 1978, and he knows from experience that his state is a good home for veterans. “Tennessee is a warm and welcoming state,” he told me. "I grew up in Chicago, which is a wonderful place. I loved Chicago. But there is something about Tennessee that makes you feel as if you were born here. I have always felt welcomed here, even as a ‘Yankee.’ There are over six million residents in Tennessee, yet it feels like one large family. I am proud to be a resident of Tennessee, and I am proud to call it home.”

He was the senior enlisted leader of the Tennessee National Guard when he was recruited into his current position by Commissioner Many-Bears Grinder. He had worked with Commissioner Grinder quite a bit during his service; they were both assigned to the headquarters unit. He said that, “when she called me in 2011, I proudly hung up my uniform and came to work for the Department of Veterans Services to serve those who served.”

As deputy commissioner, Breece’s responsibilities include managing several departments, including human resources, logistics, and budgeting, to ensure they are properly supporting the field offices, the state veterans cemeteries, and the appeals division.

One of Breece’s most important responsibilities is submitting grant proposals to the federal government. “These grants fund the cemeteries and the veterans homes. So working with the government and getting those grants written as well as making sure those projects are completed are important aspects of my job.”

He also has the title of chief operating officer, which was created when he assumed his position as deputy commissioner. “As the chief operating officer, my job is to ensure consistency across the state. Tennessee has three regions – West, Middle, and East – which means we have three assistant commissioners. I have to make sure that what the East Region is doing, in terms of veterans services, is the same as what the West Region is doing. That includes operations and policies. They have to be consistent across the state.”

Even though his own transition happened under extraordinary circumstances, Breece still found the out-processing and transition assistance program to be very useful. “Fort Campbell has a great transition assistance program, which gives opportunities to build resumes and establish a relationship with a career counsellor, among other services. I was fortunate enough to have my civilian job already lined up, but these transition services are invaluable, and I recommend every transitioning servicemember take full advantage of those opportunities.”

When it comes to the value of veterans in the workforce, Breece believes that veterans are greatly underestimated. “I think that recently transitioned servicemembers are the best-kept secret of the job market,” he said. “I think there are a lot of organizations that don’t quite understand how much veterans have to offer. My advice to the veteran is to help that employer understand your worth. Educate the civilian employer on what your job was, what your duties were. Break it down into their own language, if possible.”

He also recommends that veteran job seekers find a way to have face-to-face interaction with employers. “These servicemembers are sharp. But if they just send in a resume and never leave Fort Living Room, they might not get selected for employment. In the eyes of the employer, it’s just another resume. But if the employer meets the candidate in person, they get a whole new perspective on this person and his or her potential. Attending job fairs, such as this one, is a great way to go about this.”

When it comes to hiring veterans, there are a few things Breece thinks employers should keep in mind: “The servicemember who leaves the military today has so much to offer,” he said. “One thing employers can count on is that the recently separated veteran will more than likely be in great health. Five days a week, military men and women undergo physical training. They are required to take physical fitness tests regularly, and 100% of the troops are drug free. So the organization who hires that veteran can count on getting a healthy, drug-free individual.

“Another thing that is true of almost every servicemember is that we are adaptable. The military decides where people are needed, and they move you wherever they need someone. That’s just part of the job and part of the military lifestyle. As military members, we adapt to change; we expect it even. We accept responsibility – that is given to us.”

Breece also noted that veterans make excellent workers as both members of a team and as individuals. “We are leaders as well as followers,” he said. “In the military, we have to work as individuals as well as on teams. We believe in the power of teamwork and the concept of being part of a team, but we also value the importance of being able to make a judgment call and take action when needed. You can count on veterans to be able to do either.”

Elizabeth Stetler is the editor of Search & Employ® and a veteran of the United States Army. Contact her at estetler@recruitmilitary.com.

Williams, including its assets held through Williams Partners L.P., is an energy infrastructure...

We hope our readers will take advantage of enhanced article content in an easy-to-consume,...

Let's face it: We’ve been preparing for this our entire “milspouse” lives.

I’m not talking about...