From the Army to Herald Square 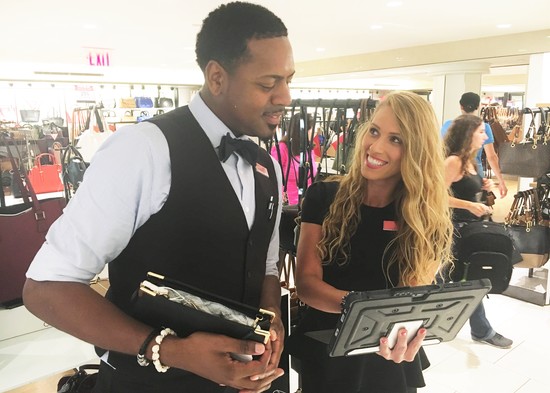 Macy’s, Inc., with corporate offices in Cincinnati and New York, is one of the nation’s premier retailers, with fiscal 2015 sales of $28.105 billion. The company operates about 885 stores in 45 states, the District of Columbia, Guam, and Puerto Rico under the names of Macy’s, Bloomingdale’s, Bloomingdale’s Outlet, Macy’s Backstage, and Bluemercury. Macy’s also operates the macys.com, bloomingdales.com, and bluemercury.com websites.

The company is currently hiring for multiple roles including: sales associate, sales support, shipping and receiving, and asset protection.

Macy’s culture and hierarchy are closely similar to those of the military, so over the years thousands of veterans have transitioned smoothly and seamlessly to positions within the company. And veterans have performed extremely well at Macy's. They bring a strong leadership skill set and work ethic that is unmatched by their civilian counterparts.

One such veteran is Jennifer Lynn Gerschultz, who served in the United States Army for seven years, separating as a captain. Gerschultz enlisted as a combat medic in 2004 and was assigned to the 82nd Airborne Division. In 2005, she deployed in support of humanitarian efforts after Hurricane Katrina struck New Orleans.

When Gerschultz returned, she was nominated and accepted to attend the United States Military Academy at West Point. She earned a bachelor of science in Geospatial Information Sciences (GIS) in 2010, and commissioned as a military police officer in the 101st Airborne Division.

She deployed to Afghanistan, where she planned and executed combat operations while embedded with the Afghan Police in Kandahar – as a platoon leader and as the director of the Female Afghan National Security Forces Engagement Initiative in Kabul. Upon return, she assumed the role of chief of operations (provisional) and provost marshal in the 101st Sustainment Brigade. Her passion for her work in Afghanistan drove her to transfer to the Civil Affairs Regiment, where she subsequently graduated from the Army Special Operations Forces Captains Career Course.

Gerschultz joined Macy’s in 2015, and she is now an assistant store manager at the flagship store in New York City’s Herald Square. She leads a team of 11 sales managers, four merchandising team managers, two operations managers, one visual manager, and approximately 400 associates. She is responsible for a $63 million annual volume.

She develops and executes strategies related to:

Gerschultz understands that her military experience is helping her succeed in the civilian sector. “I led a diverse team of 36 men and women as a platoon leader,” she said. “In Kabul, I led the female police training program and mentored the Afghan Human Rights and Gender Directorate. On the logistics brigade staff, I honed my planning, writing, briefing, and analytical skills.”

She recognizes that the civilian workforce differs from that of the military, but she encourages servicemembers not to leave everything about their military careers behind. “Building a support network is number one,” she said. “You can be an Alpha and have all the skills in the world, but when you don't have someone to vent to about the inevitable differences between military and civilian culture, the world can feel like a pretty lonely place.

“Don't stop engaging in the things you loved about the military. If you love shooting, go to the range. If you love physical fitness, join a cross-fit gym or Team Red, White & Blue. If you loved the feeling of purpose and global politics, volunteer at your local party affiliate. I do all of these things because that's who I am.”

Gerschultz's leadership skills were built during her time in service and they have continued to sharpen in her civilian career. “I train my leaders on how to drive engagement and sales through personal power and expert knowledge, the tactics with which they convey their message, and their ability to define key tasks and intent,” she said. “We only execute as well as we train. No plan survives first contact. The definition of success is a fully functional team in my absence."

In addition to planning and training, Gershultz credits the military with teaching her how to build rapport and communicate confidently and effectively. “Briefs at international round tables, division strategy development sessions, and company operations honed my skills as an articulate public speaker, which enables me to enhance my team's executive presence, be it on the floor or in the boardroom. My experiences in Kabul working with international agencies, the State Department, the local populace, and as a liaison for female engagement initiatives correlate with the massive list of partnerships that I maintain on a daily basis – to include vendor relationships and contracts, buyers, planners, cause marketing, special events, facilities, and most importantly, the customer.”

The Army also helped Gerschultz develop what are traditionally considered soft skills. “I developed a passion for human interaction, political diversity, and cultural awareness that enables me to connect and build rapport easily,” she said. “I am forever grateful for the values, ambition, drive, and structure that the military instilled in me. The military taught me how to be a direct, effective communicator. I grew up in the military where we aimed to win hearts and minds, so I enjoy incorporating the human factor in leadership development.”

One reason she enjoys working at Macy’s is that there are similarities between the company and the military. “First, the organizational structure can be nearly identically correlated to the military, but with a greater staffing responsibility,” Gerschultz said. “As a vice president store manager, you have your assistant store manager, equivalent to an executive officer or platoon leader – who has 11 sales managers, equivalent to squad leaders, five merchandising team managers (support), and a company senior team (visual, operations, HR, administration). Your sales managers and merchandising team managers have team leaders, and there are approximately 400 associates within the store.

“Planning events, daily sales drivers, empowerment, and accountability require the same skill set. The company believes in promoting to potential and personal development. We embrace our veterans and see them as outside-the-box thinkers who can effect change.”

Gerschultz has some advice for servicemembers who are getting ready to transition out: “Start early. Eighteen months out, go to job fairs and simply observe. Write several resumes that express your quantitative and qualitative skills specific to the roles you want. You better have a Linked In profile by now. Dress for the role you want. And class it up – my sailor's mouth had to go.

“Most importantly, don't sell yourself short. I can't count the number of VP’s across all industries that have said, ‘I can teach you these technical skills; you'll learn the business acumen on the job. What I can't teach is leadership and drive.’ ”

Gerschultz encourages veterans to take a service-oriented view when looking for a post-military career. “It's not about what an organization can do for you, but what you can do for your organization,” she said.