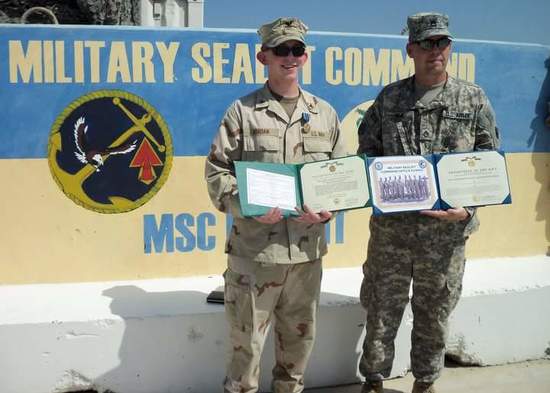 “I would never have thought of approaching a wholesale electrical distributor for an accounting job. Companies at a veteran career fair may have more job opportunities than what you’d think.”

“Joining the Navy was the best way for me to get a free education,” said Gary Jordan. “I was raised by a single mom and I had a younger sister who wanted to go to college also. I looked at all branches, and the Navy seemed like they had the best offerings for me.” Jordan, a Pittsburgh native, enlisted in 2007 and worked as a computer technician until he was deployed to Kuwait in 2009 for a year. He ultimately advanced to the rank of Private First Class (E-6).

Working in the Military Sealift Office Command, a port liaison for the ships coming in and out of Iraq, opened Jordan’s eyes. “I saw lots of equipment leaving Iraq during the drawdown in 2010,” he related. “It was sobering seeing shredded Humvees and blown-up cars leaving. It made me count my blessings and be grateful that wasn’t me.”

The Value of Mentors

Jordan credits mentors with teaching him some important skills during his time in the Navy. “I worked in a small unit of nine in Kuwait, and I was the youngest by fifteen years. I like to say I had a Navy mom and dad, because two of my superiors really took an interest in me when I was fresh and green. They guided me along and groomed me for my promotion to E-5,” he said. “That really set me up for when I returned stateside. By watching them, I learned what it takes to be a good leader. They also taught me how to watch out for junior personnel,” he went on. “I never forget their example when I have people working under me now.”

Following his deployment, Jordan joined the Navy Reserves and worked as a government contractor handling classified materials. As a newly-promoted E-5, he was again assigned to the Military Sealift Office Command, this time training others to do what he’d done in Kuwait. “By then, I was the only one in my Reserve unit with real-world deployment experience,” he said. He was later recalled to active duty at the Navy Operational Support Center in Pittsburgh, providing administrative support to deploying reservists. He worked as a command career counselor, assisting with retirement packages and helping sailors transition into different careers.

By 2014, Jordan had accumulated enough Navy service for full tuition reimbursement under the GI Bill. He began studying accounting while working as a manager of a convenience store/restaurant, and moonlighted as a tutor for other accounting students. After earning his associate’s degree in accounting from the Community College of Allegheny County, he began work on a bachelor’s degree in accounting at Seton Hill University in Greensburg, Pennsylvania.

With a career plan and his goals in mind, Jordan set out for the RecruitMilitary Pittsburgh Veteran Career Fair. “I was hoping to find something in my field,” he said. After completing a “practice lap” to see which companies were in attendance, and speaking to recruiters from a bank, someone tapped him on the shoulder.

“He was a Marine I’d known from my active duty days,” he related. This acquaintance was now a recruiter for Scott Electric, a wholesale electrical distributor and supply store with headquarters in Greensburg, Pennsylvania. “Back in the day, we had offices across the hall from each other and performed the same job at the Navy Operational Support Center. He helped the Marines, while I helped the Navy folks,” he said. “He took my resume and called me about an accounting position at Scott Electric. Within a week after the career fair, I accepted a job there.”

Jordan enjoys his new role as an accounts receivable invoice specialist collecting payments from contractors and electricians. “It’s been seamless and great,” he said. He encouraged veterans to keep their resume up-to-date, even after their job search concluded. “I got in the habit of updating mine every couple of months so I wouldn’t have to scramble to update it the night before I needed it,” he said.

Jordan also urged veteran job seekers to erase any pre-conceived ideas about what positions companies attending a veteran career fair may be sourcing. “I would never have thought of approaching a wholesale electrical distributor for an accounting job,” he said. “Each company there may have more job opportunities than what you’d think.”