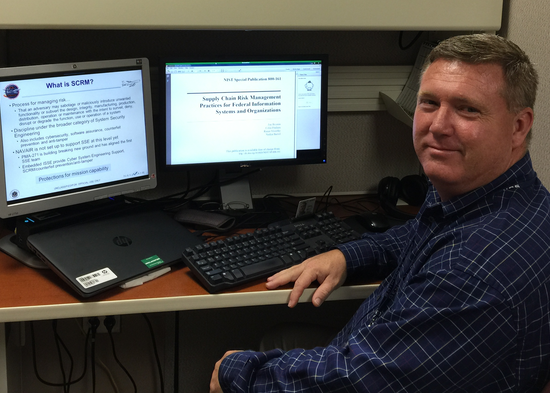 General Dynamics IT is headquartered in Fairfax, Virginia, and has more than 28,000 employees in offices worldwide. Opportunities within the company include network and systems engineers, training and simulation professionals, help desk/field service representatives, project managers, and customer service representatives.

The company’s military veterans support some of the most mission-critical programs across the Department of Defense and the federal government. General Dynamics IT has found that the unique experience and expertise that veterans offer is critical to meeting customer missions.

Company recruiters inform the candidates about the program and tell them that they and their spouses may request sponsors. The company then matches them with sponsors, based on common attributes such as branch or service, location, rank, and date of military discharge. More than 100 of General Dynamics IT employees have volunteered to be sponsors. The sponsor’s connection with a new hire is focused on the transition process, drawing on their own experience and the support that they have previously received. Transitioning veterans often find similarities within the company’s culture to the military due to General Dynamics IT focus on mission success and delivering meaningful results.

John Gleghorn served in the United States Navy for 25 years, retiring as a senior chief petty officer. At General Dynamics IT, he serves as an information security senior analyst. He implements strategies that manage daily and exceptional risks along the supply chain. The objectives: reduce vulnerability and ensure continuity.

He has implemented and monitored a program-protection plan and the Supply Chain Risk Management (SCRM) plan. The latter has identified multiple vulnerabilities and threats throughout the Department of Defense’s supply chain, and has developed mitigation strategies to combat susceptibilities that could come from many sources along the chain.

As a result of his service, Gleghorn understands the complex nature of the U.S. Navy and the needs of the fleet and sailors worldwide. “Gleghorn’s work ethic and performance are inspiring to others around him,” said his supervisor, Program Manager Jeff Blanton. “He consistently demonstrates a high level of commitment and quality towards his work and the customer. His leadership and personal accountability are what have been expected and achieved through veteran hiring.”

During his civilian job search, Gleghorn felt confident that potential employers would seek the advanced life skills and positive personal characteristics that are embedded in a U.S. Navy sailor. He understands the significance of goal-setting and the importance of teamwork to achieve the mission.

He recommends that servicemembers begin to prepare for civilian life long before their separation. He urges them to set goals so that they are prepared to answer the question, “Where do you see yourself in 5, 10, and 15 years?” He also advises them to outline multiple career plans to provide flexibility and the ability to continue through unexpected contingencies.

In addition, Gleghorn suggests that servicemembers become subject-matter experts in their fields of interest and get the best education possible – including certifications. He also stresses the importance of networking and creating contacts early.
“Most importantly, don’t sell yourself short,” he said. “Trust that the military has set you up with all the skills you need to succeed.”

Emmanuel Joseph served in the United States Army for 14 years, separating as a chief warrant officer – 2. In 2015, he joined General Dynamics IT as a Joint Operation Planning and Execution System (JOPES) action officer. As a transporter in the Army, he learned about unit movements. This experience has helped him with his civilian duties – to create and validate unit line numbers for all sustainment units in the U.S. Central Command area of operations.

According to Joseph’s supervisor, Annie Scott, Joseph is a big contributor at General Dynamics IT. “Joseph is an outstanding employee,” she said. “I can always depend on him to get the job done. He is excellent at following through and completing any task. The one trait I admire most about Joseph is that if he doesn't know the answer to a question, he will work tirelessly to help find it. He is always cordial, very punctual, has a great personality and he is always willing to help.”

Joseph works with other veterans who share similar experiences and viewpoints. Having coworkers that understand the transition from military to civilian life makes the company a great place for veterans, he says.

He is currently pursuing a bachelor’s degree. He suggests that a servicemember who plans to transition out gain as much education as possible in their career field of interest and pursue a degree while enlisted. When applying, he recommends maintaining an updated resume, highlighting specific skills learned in the military, and staying current on applicable certifications.

In the Army, Joseph learned how to plan, organize, and collaborate with different types of people and personalities. He uses the qualities he gained in the Army to be successful in civilian life. “I learned in the military how to take pride in myself and my job,” he said. “I feel that if you are not committed to what you do for a living, it is going to be hard to be successful.”

Interested in a Government job? Use our job board to find one!