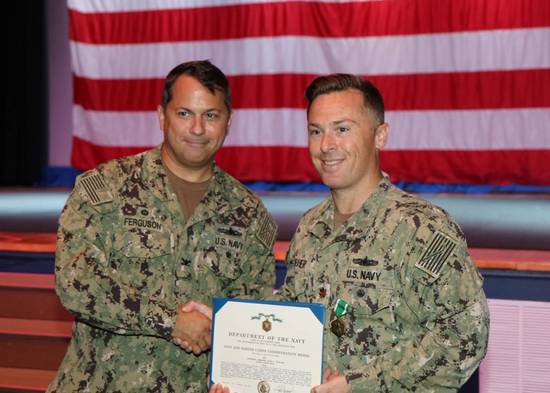 Looking for the next step after military service? Consider a SkillBridge internship, which led to a permanent job at Bradley-Morris for Tyler Bloecher.

Originally from Huntington Beach, California, Bloecher joined the Navy at age 18. “I wanted a different challenge. I remember showing up to my first command and there was a guy putting in a commissioning package to become an officer.” The idea intrigued Bloecher, who followed the same path and earned a bachelor’s degree from San Diego State. As a surface warfare officer, Bloecher completed assignments on both coasts and served as a company officer at the United States Naval Academy. After 14 years in the officer ranks and seven years enlisted, Bloecher decided to retire.

A fortuitous meeting with Tim Best, CEO of Bradley-Morris, through a church youth group, put an unexpected plan into motion. “I told Tim I’d heard of Bradley-Morris and that I’d be transitioning and retiring soon, and that maybe down the line we could connect, and Bradley-Morris could help me.” A couple months later the two met to discuss Bloecher’s goals and plans, post-Navy, and Best introduced Bloecher to the Department of Defense’s SkillBridge internship program.

SkillBridge gives service members civilian work experience through industry training, apprenticeships, or internships during the last 180 days of military service prior to separation. Whether officer or enlisted, the opportunity is open to all ranks as well as military spouses and Guard and Reserve members. The program delivers real-world job experiences to facilitate transition to a civilian career. Industry partners provide opportunities in fields including energy, information technology, manufacturing, retail, transportation, and civil service, and more. Training programs must offer a high probability of post-service employment, but a job is not guaranteed. Service members continue to receive military compensation and are covered by military benefits during their participation.

Becoming a program participant was an easy decision for Bradley-Morris. “From the moment we learned of the new DOD SkillBridge program, we were excited to evaluate how we could participate in it,” said Tim Best, CEO of Bradley-Morris, Inc. “The idea that we could help a transitioning servicemember better prepare for their transition while simultaneously allowing us to evaluate where they could best impact the organization really resonated with us. The authors of this program deserve a lot of credit: it is well-considered, written and designed, something I know all of the SkillBridge participants really appreciate.”

After hearing about SkillBridge from Best, Bloecher next set about convincing his commanding officer to allow him to participate. “I had to get as smart as I could about it and come up with reasons for why it made sense, because there is no replacement for you while you are doing the internship,” he said.

The program’s structure made plugging in easy for Bradley-Morris. “Like many companies, we have multiple departments in our organization that have phenomenal opportunities for an intern to come in, learn about our business, learn some specific skills, and, conduct meaningful work activities for that department,” Best continued. “This was exactly how we executed Tyler’s SkillBridge time with us, and it created a valuable experience for both him and our Recruiting Operations department.”

Bloecher began a 90-day internship on April 1, 2019 as a recruiting manager, and began recruiting military veterans for employment opportunities available through Bradley-Morris, Inc. The position dovetailed well with his goals and interests. “When I was retiring and thinking about what I wanted to do, I really liked the idea of maintaining a connection to the Navy. When this opportunity came up, it felt like something I’d been good at as a Navy officer, mentoring and coaching junior officers,” he said. He was hired at Bradley-Morris in July of 2019.

Bloecher gained on-the-job training by spending lots of one-on-one time with his peers. “By being in an office with other recruiting managers, I got to sit right next to them and ask questions all the time. They walked me through our database, and we did mock phone calls. Those were really helpful, because it was different from anything I’d ever done before,” he said.

The overall experience Bloecher gained through his internship proved invaluable. “It taught me how to talk to military candidates. It was a good introduction and it also gave me time to absorb what it’s like to work in a civilian culture,” he said.

An Offramp to the Civilian World

Working alongside other service members whose mission is to get veterans hired allowed Bloecher to focus on his own transition as well. “On active duty, you really work up until the last day that you’re there,” he said. “This gave me some time to get accustomed to workplace culture and get used to working in a civilian environment. All the things that a transitioning veteran needs are what Bradley-Morris does: I got help with my resume and other tools I needed to make myself more marketable.”

Bloecher likened his own SkillBridge internship to “a slower off-ramp into the civilian world” that allowed him to shift his focus from active duty. “This was a game changer for my transition. I had a place to gain real-world experience. It lessened my stress and anxiety by getting a lot of training that I knew would help me.”

Bloecher enjoys helping other veterans cross the bridge into the civilian workforce. “From my experience, you go to a required separation class, but you don’t really know what the next step is. I can serve as a resource, and what I love about our company is that we get to step in and fill the gap,” he said.

Thirteen of the candidates Bloecher recruited have been placed in jobs through Bradley-Morris, with his first placement occurring 33 days into his internship. “That was really fulfilling. It was a guy who had been out of the Navy for a little bit. We got to place him in a sales position in San Diego that he wouldn’t have found if it wasn’t for Bradley-Morris’s process. That was really cool, and everyone in the office was excited for me.”

Bloecher encourages transitioning veterans who may be interested in the SkillBridge program to be persistent. “Have the discussion with your chain of command and get a feel for whether it’s possible,” he said. “Without burning bridges, take charge of your own transition and make them say ‘no.’ You may have a discussion and hear a verbal ‘no,’ but ask them to put it in writing. Oftentimes, I’ve found that if you put a decision in front of someone and make them sign their name to it, that could turn into a ‘yes.’ People want to help other people and find reasons to say ‘yes.’ They want you to succeed.”

Bloecher enjoys the culture at Bradley-Morris. “It’s been great. Everyone has been super-welcoming,” he said. “I’ve felt like a part of the team since day one. Everyone has the same mission of helping veterans.”

“We are truly grateful for the SkillBridge program and the way it brought Tyler to our team,” said Best.