Chapter 4: Newsletters Enter the Mix and the Company Settles in Loveland 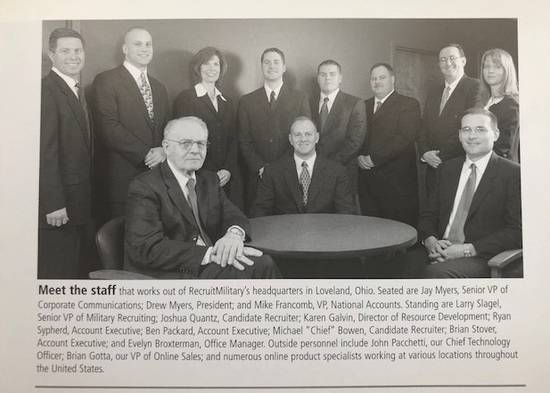 RecruitMilitary entered the online publishing business in 2002 with two newsletters for veteran job seekers. The VetTen contained ten text ads placed by employers. Incoming! contained two articles – one about job prospects for veterans in a particular industry and the other about job-hunting skills.

The title for Incoming! had a military origin, meaning something (explosive) was coming. This newsletter was sent to every military base with the aim of keeping candidates’ attentions focused on the RecruitMilitary job board – and its job postings.

“With a very tight budget, we had to find more ways to reach veterans,” said Drew. “Our job board clients would only use the job board if there were enough new candidates registering every day. So, we mailed boxes of newsletters to every base in the world. The content had to be good for it to get picked up and read by individual service members in the transition offices found on every base.”

Soon after came Hire for Effect!, a print publication for clients and top prospects. The title was a spin on the military term “Fire for Effect,” which came from military artillery. When guns have accurately “found” their target, the forward observer commanded, “Fire for Effect.”

“The idea was to generate interest and questions from employers, which worked,” said Drew. “We also wanted to establish a name that meant we had found the hiring companies (the targets), now it was time to send in the veterans to be hired.”

Drew’s father, Jay Myers, served in the Army Reserve, and was the physical sciences editor of The World Book Encyclopedia. He joined RecruitMilitary in 2003 and took on the editing and publishing assignments and provided content for online Incoming!

Both print newsletters were four-page folders published quarterly. The company decided to defray some of the expenses by selling ads in print Incoming! – VetTen text ads and sponsorship packages.

Because of the VetTen name, the company established a minimum quantity of ten ads. But Larry and his sales team stepped to the plate and sold far more per issue, as well as selling out the sponsorships. Print Incoming! was a profit-maker. “It gave us a way to aggregate candidates for free,” said Larry. “As the number of ads started growing, the publication went from tri-fold, to four pages to eight pages, and now Jay is saying that we should start a magazine.”

The launch of the online version of Hire for Effect! to more than 100,000 clients and top prospects in 2004 brought the total number of newsletters to five. By May of 2004, it was possible to see advertisers on the site, and the searchable candidate database had grown to 55,000.

The Move to Loveland

By 2003, RecruitMilitary was outgrowing its offices in Blue Ash, Ohio, and Drew wanted to move the company to Loveland, a Cincinnati suburb where he and many employees lived. Local pastor Bill Hounshell planned to expand his New Hope Baptist Church away from its Loveland location at 420 West Loveland Avenue. Luckily, the church included a separate building which housed bible school and day care programs. Drew bought the church and the 7,200 square foot school building.

He hired his friend and neighbor, Karen Galvin, to re-design the structure. The entire interior of the school was gutted and rebuilt as RecruitMilitary headquarters, and the company set up shop there in early 2004.