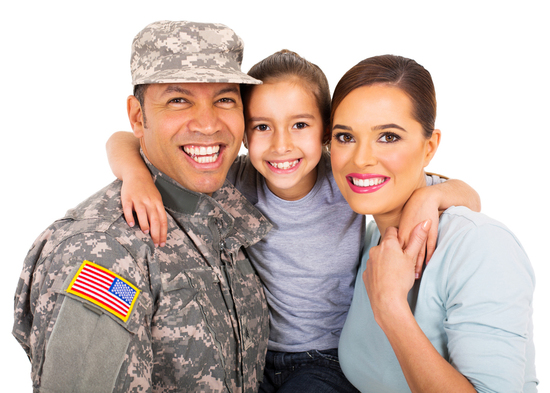 Nowadays there’s a lot of focus on hiring military veterans – rightfully so. But there’s another segment of the military population that employers should also be considering: military spouses. Why? Because they’re competent, adaptable, and highly motivated.

Another 2013 national study examined the employment struggles faced by military spouses and found that up to 90% of responding female spouses of active duty service members said they were underemployed, meaning they possess more formal education/experience than needed at their current or most recent position. Furthermore, a 2012 study revealed that military spouses made an average of 38% less total personal income and were 30% more likely to be unemployed than their civilian counterparts. Get more details about those studies here.

But smart employers should look past these troublesome statistics and recognize that military spouses are among the best hires they can make. Not only are they highly educated (roughly 10% of military spouses have a master’s degree, MBA, or professional degree), military spouses come from diverse backgrounds. They are unlikely to become overwhelmed in a stressful or changing environment, and have strong money management and budgeting skills.

Reasons to Hire a Military Spouse

Rebecca Alwine is a military spouse and enumerates the many qualities that make military spouses strong employees in a blog post entitled “Ten Reasons to Hire a Military Spouse” for MilitarySpouse.

“What we can bring to the table is all of the training we’ve received outside of our education. A lot of military spouses have volunteer training in areas like education, public speaking, resiliency, financial management, and managing volunteers. So our educational value combined with our extra training should very well set us apart from everyone else.”

Alwine goes on to note, “Yes, we know you think we move every year and that we get no notice. And sometimes, very rarely, that happens. But average turnover in most positions is 12-18 months. Military families generally move every two to four years, which in some cases can give you stability up to four times more than the average civilian employee. And, we promise, just as soon as we know we are moving, we will tell you and even help train the next person.”

Lida Citroen, in a post for Entrepreneur.com writes, “These are the men and women who remained home, kept the family together and learned to manage finances and hold a job, while dealing with the uncertainty of their military partner's fate or when or where they might be asked to relocate.”

Furthermore, she points out, “Hiring managers and recruiters must recognize that a military spouse has picked up where he/she left off in each job, learned to re-network into new communities and therefore tends to have broad and diverse skills. Companies looking to take advantage of a highly committed, passionate and resilient workforce are advised to consider and make an effort to attract military spouses.”