Anticipation: Networking and Planning Pay Off for Air Force Recruiter 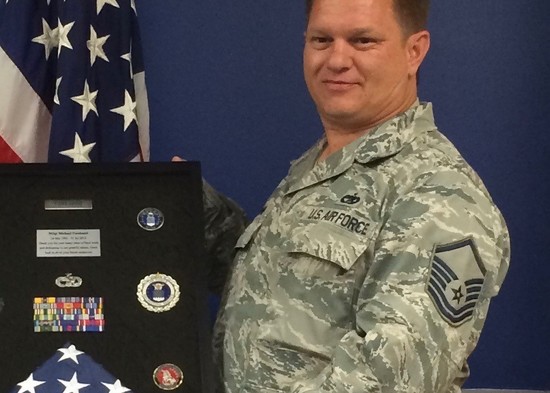 “You’ll never hear ‘It’s not my department’ from a vet. They do what’s needed to make the mission happen. They also bring an innate flexibility to any job they tackle.” This is what Michael Forehand, recruiter for Northwest Environment, Health, and Safety at Boeing, firmly believes. Forehand spent 23 years in the United States Air Force, retiring as a master sergeant healthcare recruiter. Originally from Los Angeles, he joined the Air Force so he could do something different. “I wanted to travel and try something new,” he said. “I was very lucky to get to spend the first 10 years of my service in Europe, primarily Germany and England. I had so many cool experiences. I loved the chance to see the world and sample different cultures.”

He applies elements of his training every day, noting, “The Air Force gave me a toolbox that I use on a daily basis. I now work for 30 hiring managers with a wide array of personalities. My experience helps me know my audience, so I can communicate and partner with them more effectively.”

FINDING A CIVILIAN JOB In 2013, when he was still a year out from retirement, Forehand anticipated that the process of finding a civilian job would take some time. So, in 2013, he attended a DAV-RecruitMilitary All Veterans Career Fair in Seattle. His goal: Make connections in the Pacific Northwest, where he wanted to settle.

At the event, Forehand met a Boeing recruiter, who mentored him with career coaching and resume tips. Forehand introduced himself to the recruiter and immediately asked for feedback on how he could improve his resume. He collected business cards, and asked if he could stay in touch. He emailed those contacts every six weeks or so, and requested general information – interviewing tips, etc. “That helped me develop a roadmap to how I was going to make my transition,” he said. They stayed in touch over the next year and, in January 2015, Forehand joined the Boeing recruiting team.

TIPS FOR JOB SEEKERS Forehand has some advice for men and women who are transitioning to the civilian work force.

• Don’t: “Here’s my resume. Keep me in mind.” With hundreds of resumes from each event, you will never be remembered.

• Do: “Could you review my resume quickly, and give me some feedback on how I can improve it?” or “Is there a better way I could translate this section for a civilian audience?”

• Even better: “What can I make more clear that would make me a slam dunk?” That will get someone’s attention and get you remembered.

Mentoring: Listen to what people tell you. We military people don’t always understand the civilian culture, so be open to knowing that you’re not the subject-matter expert. People will help you – but you have to ask them, not come in expecting someone to mentor you. You must demonstrate a desire to learn.

A readable resume: Know your audience, and tailor your resume to who is reading it. What if the recruiter has no military experience? Forehand related a cautionary tale of a former officer whom he described as “the complete package.” However, when civilian recruiters read his resume, they couldn’t understand it, and they passed. “Find a hybrid language that still relates your experience,” Forehand urged.

IMPRESSING A RECRUITER “In the military, we are taught what we bring to the fight,” said Forehand. “Tell me what you bring to the bottom line. I want to know how your strengths can make my company stronger. Also, try to tell me how you can use your background and also bring a fresh set of eyes to my company.” With the many opportunities available at Boeing, Forehand is always looking to fill a wide variety of roles, including environmental health and safety, human resources, engineering, facilities personnel, aircraft production, and work force planning.

Forehand prefers a great conversation to a canned elevator pitch. “If I’m at a hiring event, I want to talk to you, and I have time for more than a 30-second speech,” he said. “I have at least five minutes, so veterans have a little more time to tell me what they can bring to my mission.”

MOCK INTERVIEWS Forehand considers himself lucky to have participated in a mock interview program put on by RecruitMilitary prior to its 2013 Seattle event. He talked with a panel comprised of one veteran, one human resources professional, and one executive with no military background. “That exchange of information was very helpful, but not just to me. For example, I was able to explain that individuals with deployment planning experience could translate that skill and frame it as a form of succession planning and ensuring continuity of operations, which are vital skills in Corporate America. The HR person on the panel commented that I had more experience than she imagined. So in the end, I think they learned as much from me as I learned from them.”

SMART COMPANIES GET HELP Forehand also has some advice for recruiters. He recalled an industrial painting company that hired mostly seasonal employees, and did not employ many veterans. The company formulated a goal to bring in a permanent group of employees who represent their brand well, and recognized that veteran hires would help build a more professional image for their company. “They said ‘We don’t speak this language,’ and added a military recruiter to their team to bridge the talent gap. That’s smart.”

SMART RECRUITERS GOOGLE “Instead of just glancing through a resume, stop and ask ‘What does this mean?’ Google is your friend. Don’t know what someone’s rank means? Google what a senior non-commissioned officer (SNCO) does. You will find that the time invested up front could make all the difference in finding the right person.”

At Bradley-Morris and RecruitMilitary, We Are Veterans, Too

We are veterans to our very core at this company, which is why we are so passionate about our...

Our Champion for Military Hiring badge proudly announces, "This company gets it!"

It’s no secret that remote work is growing in popularity for organizations worldwide. Is yours...

Best Practices: Contingency Planning Like the Military Can Save Your Organization

Some industries have been (and will be) more impacted by COVID-19 than others, but all can...